Thomas the Tank Engine
and Friends, 244

Stephen and Bridget are helping Lady Hatt clear out the cupboard under the stairs. They find a variety of objects including tennis racquets, a broken musical box, a camera and even an old photo album. After clearing up the mess, the family sits down and looks through the photo album. The children agree that a photo album is a great way to remember happy times and they want to make one of their own. Lady Hatt is supportive and gives the children the old camera from the cupboard and promises to get them some film for it as well as an album.

The next day, the children ask Lady Hatt if they can visit their grandfather at work to take some photographs. Bridget and Stephen stay with the Fat Controller all day and every time Sir Topham goes to speak to an engine in the yard, the children take a photo. After using up all the film, the Fat Controller takes it to a shop where they are told the photos will be ready on Saturday.

On Saturday, they all go to collect the photos, but the children do not let anyone see them until they have stuck them into an album. Once they do, they hand the album to Lady and Sir Topham Hatt. They are astonished - there are no photos of them! The children have dedicated the whole album to the engines of Sodor. 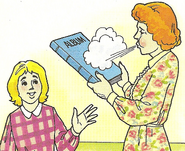 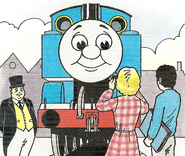 Add a photo to this gallery
Retrieved from "https://ttte.fandom.com/wiki/%27Smile,_Please!%27?oldid=1559080"
Community content is available under CC-BY-SA unless otherwise noted.