“If Daisy had her way, she'd scrap us all!”
―Thomas and Duck

A Desk for Daisy!

A Desk for Daisy! is a magazine story.

The Fat Controller's office at the main station is one of the most important places on the railway. It is so important that the railway would not be able to function correctly without it.

One day, James and Daisy are standing at the main station, waiting to set off to collect passengers when a man approaches Daisy's driver. He asks where he can find the Fat Controller and Daisy's driver points him in the direction of the office. The man thanks the driver and hurries off, leaving James and Daisy wondering who he is. James thinks that the man has come to admire his paintwork, but Daisy thinks that is nonsense; why would anyone want to see a dirty steam engine? Duck and Thomas overhear Daisy and laugh; if she had her way, all of the steam engines would be scrapped. Daisy then pulls out, leaving Thomas, Duck, and James at the station. At that moment, the Fat Controller comes out of his office with the man. The Fat Controller tells the man that he will have to take Daisy out of service. James overhears and tells Thomas and Duck, who are very shocked.

Before long, all of the engines have heard the news except for Daisy. No one speaks in the sheds that night. Daisy wonders what is wrong and Thomas tells her. Daisy is shocked and all of the engines feel sorry for her - even James who comes up with a plan.

The next morning, all of the engines refuse to work. When the Fat Controller arrives to see why, they tell him that they want Daisy to stay. The Fat Controller assures the engines that Daisy is not going anywhere and explains that the man is going to paint his office and he needs to use Daisy as an office until the man has finished. Daisy glows with pride.

Daisy rolls smoothly into a siding by the main station. Men carry the Fat Controller's desk, papers, and phone aboard her. Whenever another engine comes past, Daisy boasts about her special task, but she is always quick to point out something else that is special - all of her kind steam engine friends. 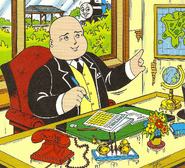 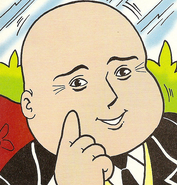 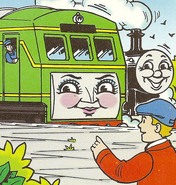 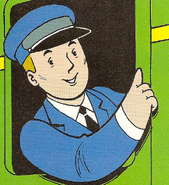 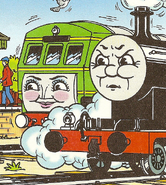 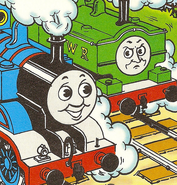 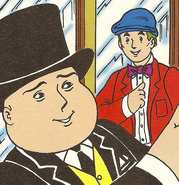 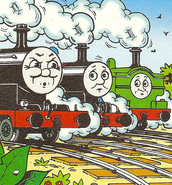 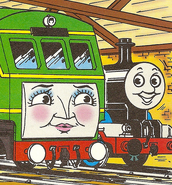 Add a photo to this gallery
Retrieved from "https://ttte.fandom.com/wiki/A_Desk_for_Daisy!?oldid=1759905"
*Disclosure: Some of the links above are affiliate links, meaning, at no additional cost to you, Fandom will earn a commission if you click through and make a purchase. Community content is available under CC-BY-SA unless otherwise noted.