“What on Sodor is that?”
―Percy referring to the foghorn

Surprises
A Foggy Friend is a magazine story, illustrated using photographs from the television series.

It is a misty spring day on Sodor and fog has rolled in from the sea. During foggy conditions, Cyril the Fogman puts detonators in the tracks to warn the engines about the fog.

The next day, Thomas is passing a foggy spot when he suddenly hears the very loud foghorn. Thomas is so surprised that he nearly jumps off the rails. Then, the valley begins to shake and rocks begin to fall. Soon, the track is blocked and the foghorn is crushed. Thomas cannot see a thing in the fog and is unable to break in time to save himself from colliding with the rockfall.

Luckily, Cyril hears the crash and comes to the rescue. He lays detonators on the tracks to warn approaching engines of the danger ahead. Soon, the tracks have been cleared and Thomas puffs home to find a surprise waiting for him - Cyril. The Fat Controller concludes that Cyril is much more reliable than any foghorn. 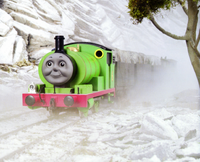 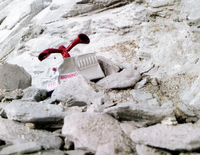 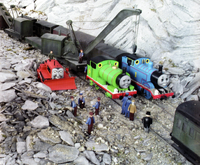 Add a photo to this gallery
Retrieved from "https://ttte.fandom.com/wiki/A_Foggy_Friend?oldid=1955070"
*Disclosure: Some of the links above are affiliate links, meaning, at no additional cost to you, Fandom will earn a commission if you click through and make a purchase. Community content is available under CC-BY-SA unless otherwise noted.