A Friend in Need

A Friend in Need is a magazine story.

Kindhearted Harvey loves to rescue his friends when they break down. When Harvey first arrived on the island, some of the other engines teased him because he looked different, but Harvey is always helpful and is now firm friends with all of the engines. One day, Harvey spots Thomas who has run out of water. Harvey offers to tow Thomas to the water tower for a drink.

Later on, Harvey sees Terence stuck on a level crossing; his caterpillar tracks are stuck on the rails. Luckily, Harvey is able to push Terence clear of danger in no time at all. Then, Harvey hears someone crying behind the hedge; it's Caroline and she has a puncture. Harvey helps by lifting her up so that her wheel can be changed.

As Harvey puffs home, he breaks down much to Thomas' disbelief. Harvey had spent so much time helping out his friends that he had not been looking after himself. Thomas' driver and fireman couple Harvey up and Thomas takes Harvey away for repairs. Thomas is pleased that he can help a friend in need, just like Harvey. 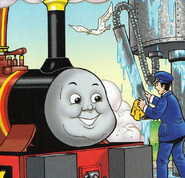 Add a photo to this gallery
Retrieved from "https://ttte.fandom.com/wiki/A_Friend_in_Need_(magazine_story)?oldid=1684481"
*Disclosure: Some of the links above are affiliate links, meaning, at no additional cost to you, Fandom will earn a commission if you click through and make a purchase. Community content is available under CC-BY-SA unless otherwise noted.