“First I get pushed by an elephant - and then I get whooshed by one! What a horrible day!”
―Henry

2005
A Jumbo-Sized Surprise is a magazine story, illustrated using photographs from the television series.

The Fat Controller arrives at the sheds with news that a tunnel on Thomas' Branch Line is blocked. He asks Henry to take some workmen to find out what is causing all the trouble. Henry is not pleased; he hates pushing trucks.

Henry stops just outside the blocked tunnel and the workmen head inside to inspect the blockage. Suddenly, all the workmen come rushing from the tunnel. They say that they tried to dig at the blockage, but it grunted and moved; whatever is inside is huge and alive. Henry's driver thinks this is rubbish and that it is probably a broken-down engine. He decides to take Henry inside to push the blockage out. Henry is worried, but his driver encourages him to be brave. Henry puffs into the tunnel, but the blockage is strong and pushes Henry straight back out of the tunnel. As Henry slides backwards down the track, a gigantic and rather cross elephant appears. Henry's driver cannot believe what he is seeing.

The elephant had wandered away from the Wildlife Park and became lost. The workmen give the elephant some buns and a bucket of water. They are just pleased they do not have to mend the tunnel. Henry is cross that the elephant is getting all the attention and wants to go home. He blows his whistle loudly and the elephant joins in with a loud trumpeting noise. Then, she sucks up lots of water and sprays it all over poor Henry who is very cross.

Henry soon feels better when the Fat Controller tells him he can have a wash-down for helping to unblock the tunnel and he now has a really exciting story to share with his friends. Thomas is just glad it was Henry who met the elephant and not him. 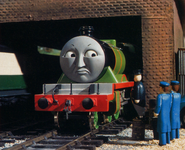 Add a photo to this gallery
Retrieved from "https://ttte.fandom.com/wiki/A_Jumbo-Sized_Surprise?oldid=1684972"
*Disclosure: Some of the links above are affiliate links, meaning, at no additional cost to you, Fandom will earn a commission if you click through and make a purchase. Community content is available under CC-BY-SA unless otherwise noted.