A Lion on Sodor

A Lion on Sodor is a magazine story illustrated using images from the television series.

One sunny morning, Cranky is hard at work lowering a crate onto a flatbed. Soon Thomas arrives to collect the special load. Cranky tells him that he needs to take the lion to the Mayor. Thomas is excited and rushes off before Cranky can explain that the lion is not real and is only a statue.

Before long, Thomas meets up with Henry. When he hears Thomas is carrying a lion, Henry is disappointed; he only has treacle. Thomas asks Henry if his lion can have some treacle. Henry agrees and Thomas' driver pours the sticky liquid into the lion's crate.

After thanking Henry, Thomas continues on his journey and soon meets up with Edward. Thomas tells his friend about the lion and, like Henry, Edward is a little disappointed to only be carrying fish. Edward offers Thomas some of the fish for the lion, which Thomas accepts. Edward's driver tosses a few fish into the crate.

Next Thomas tells Toby about the lion. Toby was only carrying trucks of straw. Thomas asks to have some for his lion to lie on. Toby agrees and Thomas' driver puts some into the crate.

At the station, the crate is opened in front of the Fat Controller. They are all surprised to see the golden statue covered in sticky treacle, fresh fish and straw. Thomas realises his mistake and luckily there is plenty of time to clean the statue before the Mayor arrives. When the Mayor does arrive, he thinks the statue is magnificent. 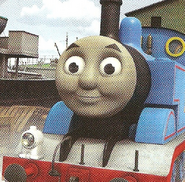 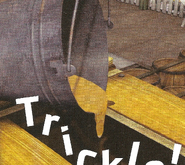 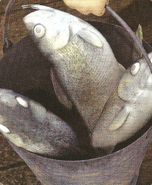 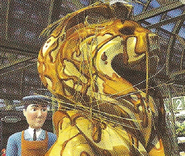 Add a photo to this gallery
Retrieved from "https://ttte.fandom.com/wiki/A_Lion_on_Sodor?oldid=1684973"
*Disclosure: Some of the links above are affiliate links, meaning, at no additional cost to you, Fandom will earn a commission if you click through and make a purchase. Community content is available under CC-BY-SA unless otherwise noted.