“I wonder what on Sodor it could be!”
―the Fat Controller

A Snowy Reception is a magazine story.

One cold morning, the Fat Controller is reading the newspaper where he learns that local adventurer Roddy Bowlby will be arriving home after months afloat. The Fat Controller thinks everyone will want to greet Roddy upon his return and arranges for Harold to keep an eye out for him and schedules more trains to run to Brendam Bay.

The Fat Controller tells Thomas and his driver the news about Roddy and gives his number one engine the special job of delivering a present to Roddy when he arrives.

The next morning, Thomas wants to know more about Roddy and so he asks his driver who explains that Roddy has sailed right around the world, starting from Brendam Bay where he lives. Suddenly, Harold whizzes overhead and says that he has spotted Roddy's yacht a few miles away and he rushes off to inform the Fat Controller.

The Fat Controller has to speed up his plan upon hearing the exciting news and takes Henry away from his log-carrying duties and teams him up with James to convey passengers to Brendam Bay. In the main station yard, Thomas sets off with his truck containing the present for Roddy.

Presently, the big moment arrives. The crowd cheer as Roddy is blown into Brendam Bay aboard his yact, the Sea Farer. The Mayor then presents Roddy with Thomas' special delivery; a giant globe with Roddy's trip marked out on it. Then, Roddy addresses the crowd to give a speech and says he has been around the world in all kinds of weather, except snow. Suddenly, snowflakes begin to descend from the sky. The Mayor tells Roddy that it may be snowing, but he won't find a warmer reception anywhere in the world. 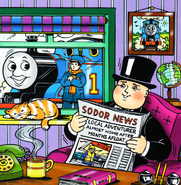 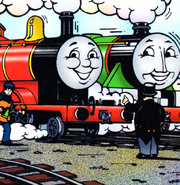 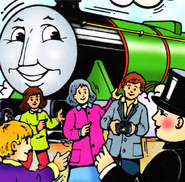 Add a photo to this gallery
Retrieved from "https://ttte.fandom.com/wiki/A_Snowy_Reception?oldid=1684984"
*Disclosure: Some of the links above are affiliate links, meaning, at no additional cost to you, Fandom will earn a commission if you click through and make a purchase. Community content is available under CC-BY-SA unless otherwise noted.