A Special Story about the Fire Engine!

Fire
A Special Story about the Fire Engine! is a rhyming magazine story.

The fire engine is called out on an urgent call to the Wellsworth station booking hall where a blaze has broken out. Someone had thrown a cigarette into a rubbish bin without extinguishing it properly. The fire chief is very cross because that is how lots of fires are caused. When Henry tries to pull into the station, he cannot see due to the smoke and goes straight to Tidmouth. 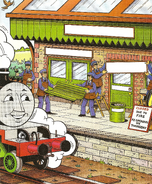 Add a photo to this gallery
Retrieved from "https://ttte.fandom.com/wiki/A_Special_Story_about_the_Fire_Engine!?oldid=1685158"
Community content is available under CC-BY-SA unless otherwise noted.