A Treat for Trying

A Treat for Trying is a magazine story.

Edward always tries to be kind and even the troublesome trucks behave for him because he takes care not to bump them. One day, Edward is steaming along when he has to slow down because Henry is on the line in front of him. The pair of engines approach Gordon's Hill and Henry is worried because he does not think he can make it up the hill. Edward tells him not to worry and offers to push him up the hill.

Later that day, Edward meets Mavis by a bridge the little diesel engine had never crossed before. Mavis is worried about travelling over the high bridge, but Edward tells her to follow him across and not to look down. So, Mavis does as suggested and makes it safely to the other side.

After work, while Edward is at the wash-down, the other engines hear about how helpful he had been that day. They have an idea which they swiftly take to the Fat Controller.

The next day, Edward starts work as usual, but when he comes back to the main station yard, he is very surprised. The yard has been decorated with balloons and flags. A big banner saying 'Thank You, Edward!' is held up high by Bill and Ben. Edward learns that the engines want to thank him for trying so hard to help them. When Edward is called upon to give a speech, he cannot think of anything to say, but Mavis tells him he can if he tries. 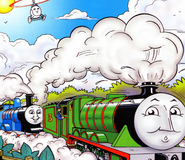 Add a photo to this gallery
Retrieved from "https://ttte.fandom.com/wiki/A_Treat_for_Trying?oldid=1685260"
*Disclosure: Some of the links above are affiliate links, meaning, at no additional cost to you, Fandom will earn a commission if you click through and make a purchase. Community content is available under CC-BY-SA unless otherwise noted.