Thomas the Tank Engine Wikia
Register
Don't have an account?
Sign In
Advertisement
in: DVDs, US VHS/DVD releases, Digital Video,
and 2 more

Sticky Situations (US)
Santa's Little Engine (Malaysia)
A Very Thomas Christmas is a US, Canadian and Malaysian DVD featuring four sixteenth series episodes, released in 2012. It was re-released in 2016 with new artwork. It was released under the title Ho Ho Snowman! for Malaysian audiences.

Ring in the Holiday cheer with Thomas!

All aboard for a special holiday delivery filled with friendship, teamwork and fun! Rheneas slows down and discovers the perfect Christmas tree. Charlie knows how fun snow can be and discovers that teamwork in the snow is the most fun of all. Edward gets Salty just what he asked for - the perfect story to retell - and Emily learns the best way to be Really Useful. Unwrap the holiday adventures with Thomas and his friends and best wishes for A Very Thomas Christmas!

The snow is lying thick on the Island of Sodor and Henry really doesn't like the snow! He puffs slowly along, grumbling and groaning - right past Charlie who is shunting trucks. Charlie loves the snow and decides to show Henry that snow really can be fun! He hides behind a huge snowman and as Henry rumbles past... Charlie pretends to be the snowman telling a joke! Henry stops: amazed and... terrified! A talking snowman! And a snowman talking to him! Charlie keeps trying with the snowman jokes but Henry doesn't find them funny. Instead, he huffs to hide in Tidmouth Sheds and won't come out! Charlie didn't want to scare Henry. He explains to Henry that he was the talking snowman and now he'd like to help Henry make his deliveries. Together - and slowly - Charlie and Henry puff along the snowy tracks - enjoying winter Sodor and even... a joke! 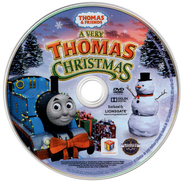 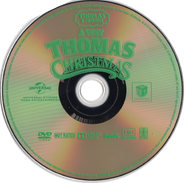 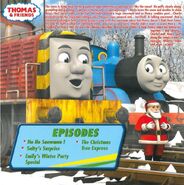 Malaysian DVD Episode Selection menu
*Disclosure: Some of the links above are affiliate links, meaning, at no additional cost to you, Fandom will earn a commission if you click through and make a purchase. Community content is available under CC-BY-SA unless otherwise noted.
Advertisement