A Visit to London for
Thomas the Tank Engine

“I'll have you there quicker than you can say 'Piccadilly Circus!'”
―Dilly to Thomas and Annie

The Fat Controller has been invited to the Queen's birthday celebrations, far from the Island of Sodor, in the biggest city in the land, London. And what better engine to take him there than Thomas the Tank Engine.

A delighted Thomas makes the long journey to London where he is put on a barge and taken down the Thames seeing Tower Bridge, St Paul's, The Shard, Parliament and many other landmarks along the way. It's a very proud day for the little blue engine in the big city! 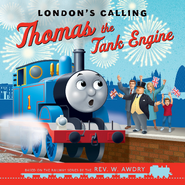 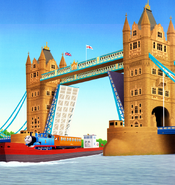 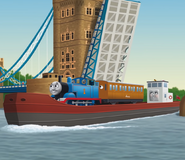 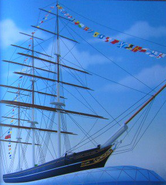 Eurostar
Add a photo to this gallery
Retrieved from "https://ttte.fandom.com/wiki/A_Visit_to_London_for_Thomas_the_Tank_Engine?oldid=1918225"
*Disclosure: Some of the links above are affiliate links, meaning, at no additional cost to you, Fandom will earn a commission if you click through and make a purchase. Community content is available under CC-BY-SA unless otherwise noted.