Adams, also known by his number 488, is a large tank engine who resides on the Bluebell Railway.

"Adams" originated from the London & South Western Railway and was later saved from scrap and brought for preservation by the Bluebell Railway Preservation Society.

When Stepney visited the Island of Sodor, he mentioned Adams in a conversation with Edward. He and Cromford did not have names then, so the other engines nicknamed him "Adams", after his designer, William Adams. According to Stepney, his Controller was unaware of this name change and intended to keep it a secret between the engines.

According to Stepney, Adams is a lovely engine who "can stroll away with any load he's given".

Adams is based on the real No. 488, an LSWR 415 class "Radial Tank" engine, built on 31st March 1885 for hauling goods on the London & South Western Railway. Unlike his Railway Series counterpart, it does not retain the name "Adams". 488 was withdrawn from service on 31st July 1961. The locomotive was then purchased by the Bluebell Railway, as he was the one retaining the original pattern of boiler.

488 is currently in service on the Bluebell Railway as British Railways number 30583, the number and livery the engine carried until 1961 on the Axminster to Lyme Regis branch line in Devon. 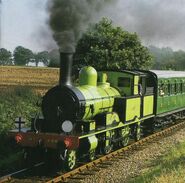 The real "Adams"
Add a photo to this gallery

Originally, Adams was painted in LSWR apple green with black and white lining; carrying his LSWR number 488 painted on his front bufferbeam in yellow. For the Bluebell Railway's Branch Line Weekend in March 2019, he was repainted in British Railways black with red and white lining; carrying his BR number 30583 in white on his bunker, plus the 'ferret-and-dartboard' logo on his cabsides. 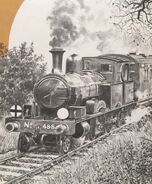 Add a photo to this gallery
United Kingdom
* RWS only | ** T&F only
Bluebell Railway
* RWS only | ** T&F only
Retrieved from "https://ttte.fandom.com/wiki/Adams?oldid=1772065"
*Disclosure: Some of the links above are affiliate links, meaning, at no additional cost to you, Fandom will earn a commission if you click through and make a purchase. Community content is available under CC-BY-SA unless otherwise noted.