The Yellow and White Airship

In Thomas & Friends, a blue airship (referred to as the zeppelin) made an appearance. It was closely observed by Hugo, who was jealous of how the airship could fly, but he could not.

In the magazines, a yellow and white airship was launched from Sodor Airport in 2007. Its maiden voyage was televised by Sodor TV and the Mayor of Sodor and the Fat Controller were among its passengers.

Hugo, Emily, James and the Airship 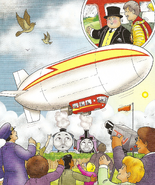 The Yellow and White Airship 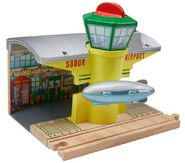 Wooden Railway
Non-rail vehicles
* RWS only | ** T&F only | *** Other Media only
Deutsch Polski
*Disclosure: Some of the links above are affiliate links, meaning, at no additional cost to you, Fandom will earn a commission if you click through and make a purchase. Community content is available under CC-BY-SA unless otherwise noted.