Alaric is a narrow gauge mountain-climbing engine working on the Culdee Fell Railway. Like the other mountain engines, he has his own coach used for passenger services.

Alaric was built at the Swiss Locomotive and Machine Works in Winterthur, Switzerland in 1962 to the latest "superheated" design. He arrived on Sodor in May allowing Shane Dooiney to be sent away for an overhaul.

Alaric was later mentioned in a conversation between Ernest, Wilfred, and Culdee. According to them, Alaric is "nice and quiet".

Not much is known about Alaric's personality, though he is described as being nice and quiet. It can also be assumed that he is careful and cautious like the other mountain engines.

Alaric is based on No. 7 Ralph, an engine who worked on the Snowdon Mountain Railway, he was originally called "Aylwin" when built in 1923 and was renamed "Ralph Sadler", before it was shortened to "Ralph". "Ralph" was withdrawn in 1990, and is unlikely to return to service.

Alaric is painted purple with orange lining. The number "7" is painted on the sides and back of his cab in yellow and he has red nameplates, with his name in gold, on the sides of his tanks. 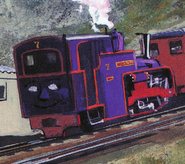 Alaric as illustrated by Gunvor and Peter Edwards

Korean version
Add a photo to this gallery

Alaric in an annual illustrated by Edgar Hodges 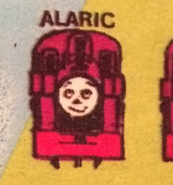 Alaric pushing The "Truck" despite bad weather in Famous Engines

Alaric as seen in Thomas's ABC

Alaric as seen in Thomas's Book of Colours

The inspiration of his only illustration appearance
Add a photo to this gallery
International Characters
* RWS only | ** T&F only | ✦ Changed location
Culdee Fell Railway
Retrieved from "https://ttte.fandom.com/wiki/Alaric?oldid=1737636"
*Disclosure: Some of the links above are affiliate links, meaning, at no additional cost to you, Fandom will earn a commission if you click through and make a purchase. Community content is available under CC-BY-SA unless otherwise noted.