Algy is a bus who works near the Little Western. He is owned by Sodor Roadways.

In his first appearance, Algy took over Bertie's naturalist excursion when Bertie fell ill. After a few miles, Algy broke down while waiting at some traffic lights. The naturalists laughed and offered to push Algy and shortly afterwards his engine started up again. Eventually they reached the hills and whilst the naturalists went off looking for birds and plants, Algy's driver tried to mend him.

However, when the naturalists came back an hour later, Algy still was not fixed. The naturalists decided to have their picnic to pass the time. But when they finished, Algy was still being mended. Algy's driver headed off to a telephone box, but just as he arrived, Bertie came to the rescue and continued the naturalists' trip.

In his second appearance, Duck met up with Algy at the middle station on the Little Western. Algy was asked to look after Duck's passengers, when Duck's water gauge and tank began leaking. He delivered Duck's passengers home, while Oliver helped Duck back to the shed.

In his last appearance, Algy had to take over Bertie's climbing excursion when Bertie was developing engine trouble. But halfway through the journey, Algy had to wait at a traffic light and his driver could not restart his engine. So the climbers had to push him out of the way to avoid a traffic jam.

Finally, Algy was able to continue on his way. After they arrived at their destination and the climbers had their lunch, Algy's driver tried to start him again. But this time, all hope was lost and everyone was stranded. Luckily, Bertie was called and saved the day.

Not much is known of Algy's personality, apart from his close friendship with Bertie.

In his first appearance, Algy had the same design as Bertie except his front was more slanted and his rear wheels were exposed. He was based on an AEC Regal "T Class" London Country Area bus.

In his second and third appearance, Algy was redesigned and had a full cab (as opposed to one side being his bonnet). His second basis loosely resembles a Daimler CVD6SD.

Algy's second basis
Add a photo to this gallery

Algy in his first appearance 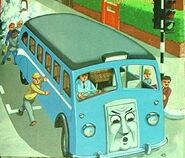 Algy in his second appearance 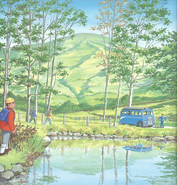 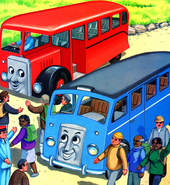 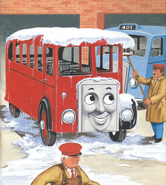