Although it never appeared in the Railway Series, the Amazon Rainforest was indirectly mentioned in the foreword to Duke the Lost Engine, as the discovery of Coronel Church abandoned in the rainforest was an inspiration for the book.

When Thomas and Nia visited Brazil, they travelled through the rainforest to follow Ace on his around-the-world rally. Gustavo's Express Line runs through here.

A water tower in the Rainforest

The Rainforest in the twenty-third series

The junction leading to The Brazilian Station

Coronel Church as it was rediscovered 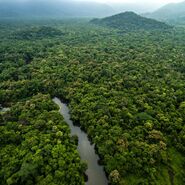 The real Amazon rainforest
Add a photo to this gallery

TrackMaster
Add a photo to this gallery
Brazil
Retrieved from "https://ttte.fandom.com/wiki/Amazon_Rainforest?oldid=1738594"
*Disclosure: Some of the links above are affiliate links, meaning, at no additional cost to you, Fandom will earn a commission if you click through and make a purchase. Community content is available under CC-BY-SA unless otherwise noted.