Ambulances are vehicles that transport patients and medical supplies. One of them appeared in the sixth series episode Percy's Chocolate Crunch.

Despite not making any other appearances, one of the signs on the Sodor Search and Rescue Centre building features a depiction resembling the same design as the ambulance and a fire engine.

Other ambulances also appeared in the books, Thomas Noisy Book, Henry Goes to the Hospital and Thomas the Tank Engine's Big Yellow Treasury. They also were mentioned in the magazine stories, Trouble in the Tunnel, Emergency! and Operation Rescue. One was also mentioned in the annual story, Golden Oldies.

The ambulances are painted white with a red cross on the sides and back of them. They mostly have silver or red hubcaps, while others have the same coloured hubcaps as their bodies.

In the book, Henry Goes to the Hospital, an ambulance was painted cream. 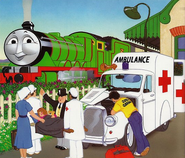 An ambulance in Henry Goes to the Hospital

An ambulance as illustrated by Ken Stott 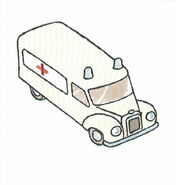 An ambulance in Learn With Thomas

An ambulance in a magazine story 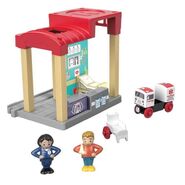 Wood
Add a photo to this gallery
Non-rail vehicles
* RWS only | ** T&F only | *** Other Media only
Retrieved from "https://ttte.fandom.com/wiki/Ambulances?oldid=1778661"
*Disclosure: Some of the links above are affiliate links, meaning, at no additional cost to you, Fandom will earn a commission if you click through and make a purchase. Community content is available under CC-BY-SA unless otherwise noted.