“The live action appealed to me as it felt like the best train set ever and I had and loved my model railway as a child.”
―Andrew Brenner on the original live action model series, 2012 SiF interview

Andrew Lewis Brenner (born 7 February 1961) is an American-born British script writer, producer, songwriter and singer who was the head writer of Thomas & Friends from November 2010 to August 2018, succeeding Sharon Miller. In 2019, David Stoten became the new head writer of the series.

Brenner worked on the magazine stories, starting at the beginning of their publication in 1987. He was given series one and two on video and was asked to adapt the episodes into magazine stories. When Brenner ran out of episodes to adapt, he wrote original stories, several of which were adapted into third series and fifth series episodes without his knowledge or consent. He stopped working on the magazines soon afterwards. Brenner was never credited for his work in either the magazines or the television series. Among the stories that were adapted were Henry's Forest, which was inspired by a storm that caused damage and blew trees over around London.

Brenner was also the head writer of "Tractor Tom", "Angelina Ballerina", "Fireman Sam", and "The Cramp Twins". It was stated on his online CV that he is the headwriter for Jack and the Pack, but this claim was later removed for unknown reasons. He is currently head writer on "Pablo."

He left Thomas & Friends in August 2018 to pursue other projects. The twenty-third series was his last contribution to the series. He was succeeded as head writer by David Stoten starting from Steam Team to the Rescue! 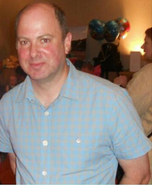 Behind the Scenes: Thomas & Friends: Journey Beyond Sodor
Add a photo to this gallery

Retrieved from "https://ttte.fandom.com/wiki/Andrew_Brenner?oldid=1702402"
Community content is available under CC-BY-SA unless otherwise noted.