They first appeared in the Railway Series book, Thomas the Tank Engine, which was published in 1946. Their last appearance was in Thomas and his Friends, published in 2011.

Illustrations of Annie and Clarabel:

The coach that was to be the basis for Annie was first built by a teenage Wilbert Awdry as part of a model railway layout. Many years later, after a long hiatus from modelling, a brake coach was built to match so that the Reverend's Thomas model would have a complete train and it would be called Clarabel.

The Rev. W. Awdry made another version of Annie & Clarabel for his model layout in the 1970's
Add a photo to this gallery

Clarabel cameoed in the series premiere, but both wouldn't be properly introduced until Thomas and the Breakdown Train, making several appearances since. The two were constantly portrayed as faithful to Thomas but prone to complaining from time to time, either from Thomas's behavior or other factors. As they belong to Thomas, Annie and Clarabel have multiple appearances, rivaling their engine in frequency. The 2 rarely saw any speaking roles from series 8-16, but since Blue Mountain Mystery, they became series regulars and now speak in many episodes. Shelley-Elizabeth Skinner voiced both in Thomas and the Magic Railroad, while Teresa Gallagher voices both of them in the english dub since 2012. Gallagher and Skinner portray them with British accents, while the former depicts Annie with a deeper voice compared to Clarabel.

Annie and Clarabel were made from Tenmille's gauge 1 Stroudley 1st/2nd Composite coach with custom roofs and vacuum formed ends. For production of the episode, Sir Topham Hatt's Holiday, resin copies of them were made.

Resin copie models that first appeared in the same episode

In the Clearwater Features era, Annie has her front bufferbeam lowered to match Thomas' low buffers. In the third series, it was raised to the same position as her rear one and Clarabel's. However, many of the promotional arts remains low position.

Comparison of the truck's and Annie's bufferbeam position

Thomas and Annie's front bufferbeams side by side

In the first series episodes James and the Coaches, Annie and Clarabel were reused for the orange branch line coaches. 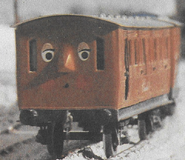 In the third series episodes Thomas Gets Bumped, Annie was seen with open doors. This was reproduced by bonding door parts to the side.

In the tenth series episodes Thomas and the Shooting Star, Clarabel was seen with a tail lamp. This was powered by a hidden battery pack.

Annie and Clarabel have modifications throughout the model era. These include:

During production of the twelfth series, new faces were proposed for Annie and Clarabel. These faces would be grey and rectangular similar to many of the other characters in the television series. Additionally, the new faces would not be meshed into the carriage body, making it easier to add the faces in post using CGI tracking software. Ultimately, the design was dropped and they retained their original face designs.

Annie and Clarabel's resin models are now on display at the Hara Model Railway Museum. They had previously been on display at Nitrogen Studios.

In 2019, a faithful replica prop was made by CoolProps in Japan and sold to the public. They used the original models located at the Hara Model Railway Museum in Japan for referencing.

Thomas with Annie and Clarabel

By removing the roofs, the seats inside can be seen.
Add a photo to this gallery

Gauge 3 models of Annie and Clarabel was built in the eleventh series to be used alongside the large-scale models of Skarloey Railway engines, which had been used since the fifth series for ease of filming and reliability. The models only appeared in the episode, Duncan Does it All.

A close-up model of Annie and Clarabel were built to be used for scenes where they had to interact with the close-up scale figures. The same model was used for both coaches with Annie's name written on one side and Clarabel's name on the other.

Annie and Clarabel's close up model was used in the first, third, fourth, sixth, eighth, ninth, tenth, eleventh, and twelfth series, and the special Calling All Engines!.

In the episodes James and the Coaches and Edward's Exploit, Annie and Clarabel's close-up model was reused for an orange branch line coach.

In 2009, the series introduced Computer-Generated Imagery (CGI) as a replacement for the show's long-standing live-action models. Annie and Clarabel were recreated from scratch in CGI by Nitrogen Studios. Their models were "hand-sculpted" in Maya, a 3D animation and modelling software.

Photographs of Annie and Clarabel's Gauge 1 models were used for referencing. According to Greg Tiernan, every detail of the original television series models for each character is carefully reproduced in the CGI model. The models are subjected to many rounds of review before they are submitted to HiT Entertainment for final input and approval.

Their CGI models have gone through some slight changes.

The following pantone colours are used on Annie and Clarabel's CGI models:

Clarabel has a brake compartment for luggage and a guard, unlike Annie. But many merchandise items except some Japanese merchandise share the same mold as Annie, so her guard compartment is omitted. And also seen in several promo art and CGI promos.

Wrong CGI promo
Add a photo to this gallery

Also, even if Clarabel had guard compartment, it was sometimes on the front (opposite her face) by mistake. This error may have been caused creators confusion due to her wrong direction in the television series.

Retrieved from "https://ttte.fandom.com/wiki/Annie_and_Clarabel/Behind_the_Scenes?oldid=1771750"
*Disclosure: Some of the links above are affiliate links, meaning, at no additional cost to you, Fandom will earn a commission if you click through and make a purchase. Community content is available under CC-BY-SA unless otherwise noted.