East of Arlesburgh, Island of Sodor

The Arlesdale Castle is a small ruined castle located on Toby's Branch Line. The Cliff Side Track and the Arlesdale Lake and Mountains Line are located nearby.

The castle in the first series 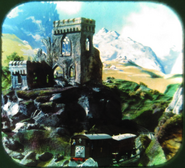 Add a photo to this gallery
Retrieved from "https://ttte.fandom.com/wiki/Arlesdale_Castle?oldid=1708015"
Community content is available under CC-BY-SA unless otherwise noted.