The Arlesdale Railway (also called the "Small Railway") is a 15"-gauge railway running from Arlesburgh along the old route of the Mid Sodor Railway for some 10 miles to Arlesdale. The ownership of this railway is shared by a consortium consisting of the management of the North Western, Skarloey and Culdee Fell railways.

In 1964, Sir Topham Hatt was concerned about the congestion in Tidmouth Harbour and Knapford Harbour. He took interest in Arlesburgh Harbour, a port connected by rail to the North Western Railway but which had been infrequently used following the closure of the Mid Sodor Railway in 1947.

He made several visits of inspection and decided that Arlesburgh and the rail extension to it were capable of development. He noted also that while his line, which had been under minimum maintenance, was heavily overgrown, that of the defunct Mid Sodor Railway, was comparatively weed-free. On enquiry, he was told that the MSR had, from motives of economy, used spoil from the lead mines as ballast; material which they could take and use merely for the asking.

Once exhaustive tests had proved that this spoil really was weed-resistant, Sir Topham suggested to the management of Culdee Fell and Skarloey Railways that they join the NWR in a consortium to exploit it and that a railway along the Mid Sodor's former trackbed could be laid to take it away.

At this point in the negotiations, Walter Richards, the Manager of the Culdee Fell Railway, proposed that "Bearing in mind the scenic attractions of the valley the basis of the Company be broadened to encourage investment from those engaged in the Tourist Industry". This proposal, seconded by Sir Handel Lloyd Brown, was carried unanimously and was met with a good response.

The Arlesdale Railway Company was formed as a separate concern to buy up the 10 miles or so of MSR trackbed together with the remaining stations and buildings and lay a new railway thereon; while the Ballast Company acquired not only the lead mines but also a granite quarry at Marthwaite which had just come on the market and finally called itself the Arlesdale Granite and Ballast Company Ltd.

It was decided that the railway must not only be capable of handling loads of ballast but that it should also be of a character sufficiently out of the ordinary to attract visitors to the valley and thus bring benefit to hotels and guest houses in the area.

The remarkable revival of the Ravenglass and Eskdale Railway in Cumbria had impressed the Railway Board and the Thin Clergyman was able to put the Chairman, Lord Harry Barrane, into touch with the R&ER Management. A close association then began which has continued to this day greatly to the benefit of both railways. It was the Ravenglass company who told the consortium, in strict confidence, where three locomotives (Bert, Rex and Mike) were to be obtained, together with a number of Open and Semi-open coaches. These, it was considered, could serve until the railway could buy or build more up-to-date stock of their own. The Ravenglass and Eskdale Railway had abandoned their former ballast and road-stone business, but they allowed the consortium to search their records for designs of bogie Hopper wagons, along with a Chute gantry for unloading them quickly with the minimum of effort.

The Mid Sodor trackbed had been soundly and solidly constructed and wherever possible their stations and structures were used. Track-laying, therefore, went ahead rapidly under the direction of Mr Fergus Duncan, the General Manager, also known as the Small Controller. The line was inspected and passed for opening by Easter 1967 and Small Railway Engines recorded incidents which occurred during the first year of operation.

Many improvements have since been made. The "semi-opens" were replaced by closed saloon coaches built at Arlesburgh Works. The "Opens" have been retained and are always popular in fine weather.

Blister I and Blister II were acquired to assist in the construction of the line and are now used by the plate-laying gangs and for shunting at Arlesburgh. The railway also built Frank in 1967 for shunting and empty carriage workings and acquired Sigrid of Arlesdale in 1969, who takes employees to and from their places of work, as well as other work trains.

The most reliable of steam engines sometimes fail, or as more often happens, extra passengers require the provision of a Relief train when no steam engine is available. The traffic increased so much, that a fourth steam locomotive had already been required. It was designed and built in Arlesburgh Works in 1976. Douglas named him Jock for his yellow livery.

The railway’s popularity has brought further problems arising from those mentioned above. Unexpected upsurges in passenger numbers requires ability to provide Relief trains. These "extras" upset normal traffic working but have to be sent through with the minimum of delay to avoid spoiling the passengers' enjoyment. This was not always possible under the former system of traffic control. Ravenglass have had the same problem and have countered it by a system of Radio Control in 1977. They suggested to the Arlesdale Railway to adopt their system too and gave them every assistance. So far, apart from "teething troubles" the system has worked well. It has the conditional approval of the Railway Inspectorate. The Small Controller has however no doubt of the final outcome. He is looking forward to the day when other railways on the Island are recommended by the Inspector to follow Arlesdale's lead.

In 1987, Fergus Duncan was still General Manager, while Ivan Farrier served as Chief Engineer and Col. Ranald Drixon served as Chairman of the Board. By 2005, after nearly 40 years service to the line, Fergus Duncan was preparing for retirement. His potential successor is unknown and it is felt in many quarters that the example set in his service to the line will be a difficult one to follow.

Miniature engines, who run on the 15"-gauge track, live and work on the railway and their line is mainly used to transport waste materials from several of the abandoned mines at Arlesdale for use as ballast, but it also attracts popularity due to the novelty of being pulled by a 1/3 scale engine. The engines also transport wool for making clothes.

From Arlesburgh the line stops at Arlesburgh Bridge Street. After that, the line runs between river and road. After one and a half miles a post will be seen standing on the right hand side of the track, with a disk above it that gives a warning that a passing loop is ahead. The line calls at Ffarquhar Road. A few hundred yards east of the station the line swings towards the river and on the right hand side, as it curves away to the north east there stands an old water mill and the line later reaches Marthwaite. Leaving Marthwaite, the line traverses the belt of woodland for nearly two miles and it was here that the Fat Clergyman got drenched. The branches are now regularly cut back. Later there is a passing loop just before reaching Arlesdale Green. Leaving the station, the line passes through another short belt of woodland and alongside an unfenced lane (where Bert got drenched with muddy water by the Thin and Fat Clergyman) which leads to cottages built by the Mid Sodor Railway for employees. There was a junction here in Mid Sodor days. The line turns south to the top station at Arlesdale. 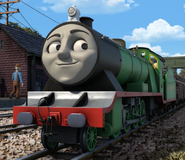 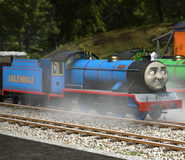 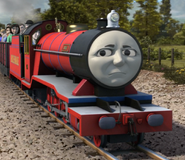 Mike
Add a photo to this gallery 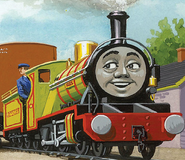 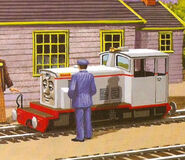 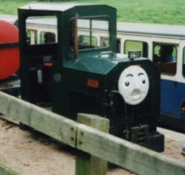 Blister II
Add a photo to this gallery 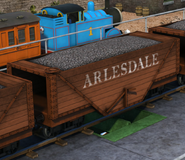 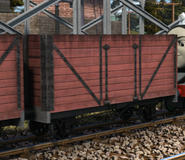 Arlesdale Plank Trucks
Add a photo to this gallery

Arlesdale Railway
* RWS only
Retrieved from "https://ttte.fandom.com/wiki/Arlesdale_Railway?oldid=1781079"
*Disclosure: Some of the links above are affiliate links, meaning, at no additional cost to you, Fandom will earn a commission if you click through and make a purchase. Community content is available under CC-BY-SA unless otherwise noted.