“I always cross the island twice by tea time. Emily will never do that!”
―Gordon

As Good as Gordon

As Good as Gordon is a magazine story, it was illustrated by using photographs from the television series.

One day, Gordon is given the job of taking the new Mayor of Sodor on a tour of the island. The other engines are all hoping they will be chosen to take Gordon's usual express train. Finally, the Fat Controller chooses Emily. Gordon is not sure Emily is up to the job, but Emily is determined to be as good as Gordon.

When she pulls into Maron Station, Emily tells the passengers to hurry up rudely. Emily is so busy trying to be as good as Gordon that she does not fill up with water at the water-tower and does not notice that Bertie's guaranteed connection has arrived. She leaves all of his passengers stranded.

Eventually, Emily's steam runs dry and she is out of coal. The Fat Controller is very cross and says that Emily must take the slow goods train tomorrow to learn some patience.

The next day, Emily puffs along slowly with her slow goods. She tells Thomas that she is learning patience and only wishes she could learn it faster. 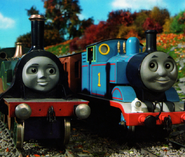 Add a photo to this gallery
Retrieved from "https://ttte.fandom.com/wiki/As_Good_as_Gordon_(2005_magazine_story)?oldid=1685416"
Community content is available under CC-BY-SA unless otherwise noted.