“I like my engines 'funnel first'!”
―The Fat Controller

Back to Front! is a rhyming magazine story.

One morning, Thomas is the last to leave the shed, but the turntable will not turn. Diesel teases Thomas and the coaches are quite put out by Thomas facing them. Even the Fat Controller confesses that he likes his trains to be "funnel first". Soon the sky turns black and icy hail begins to fall. Much to Thomas' delight, whilst travelling along his branch line, his coal bunker bears the brunt of the heavy hail. Now Thomas thinks that, just sometimes, it is best to be back-to-front. 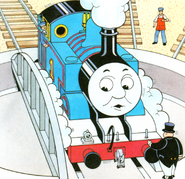 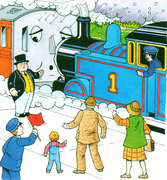 Add a photo to this gallery
Retrieved from "https://ttte.fandom.com/wiki/Back_to_Front!?oldid=1695645"
*Disclosure: Some of the links above are affiliate links, meaning, at no additional cost to you, Fandom will earn a commission if you click through and make a purchase. Community content is available under CC-BY-SA unless otherwise noted.