Ballahoo (Sudric for The Farm on the River Hoo) is a dormitory town for Barrow-in-Furness.

Ballahoo is notable for its two bore railway tunnel. The first attempt at cutting a tunnel through the Ballahoo Ridge was made by the Sodor and Mainland Railway, which collapsed, resulting in trains only running between here and Kirk Ronan.

The second tunnel was cut in 1915 by the North Western Railway. While work was in progress a section midway collapsed leaving two tunnels. In 1922, Henry stopped in the first tunnel and refused to come out. As it was impossible to move him, it was decided to instead cut a new bore. When Henry was finally out the following year, both bores remained in service. As a result of these events, the tunnels were nicknamed "Henry's Tunnel".

Thomas and Toby arriving at Ballahoo

Ballahoo Town Bridge and the village in Day of the Diesels 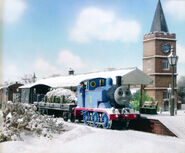