James and the Diesel Engines (RWS)

Bear (originally known by his number, Diesel 7101) is a mixed traffic diesel engine who works on the Main Line. His name comes from the growling noises his engine makes, which make him sound like a bear.

Bear was originally known as D7101, and came to Sodor on loan with another diesel named D199. His companion was blatantly arrogant, and bad-mouthed the steam engines. Vulgar noises greeted this, until Duck and D7101 managed to shut up D199.

The next day, 7101's injector failed while pulling "the Limited". Henry, who was already towing 199 and his train of oil tankers, came to help; 7101 was still able to move by himself with some help from Henry. To the passengers' delight, Flying Scotsman took their train, while Henry helped 7101 home. Along the way, Henry told the diesel about his failed regulator. 7101's opinion of steam engines was greatly changed after the incident.

The engines persuaded the Fat Controller to let 7101 stay on the North Western Railway, and renamed him "Bear." Bear liked this name, saying it meant he "really belonged". Even James, who was the last to accept diesels, could not help but like him. It later was revealed that Bear pulls the Express when Gordon, Henry and James are busy. Bear also did Henry's duties while Henry was at the Works.

Bear is one of the more polite, charming, respectful, useful diesels. He is a loyal, friendly, and sympathetic sort, but he is extremely noisy and obstreperous, as he often makes unusual growling noises much to the disturbance of the other engines; thus earning the name "Bear". The Fat Controller was impressed with BoCo and Bear; he called them "versatile" because they could pull both coaches and trucks. BoCo and Bear usually defend the steam engines when a visiting diesel boasts about how superior they are, and vice versa, as the steam engines often use BoCo and Bear as examples of diesels that are not rude and nasty.

Bear is based on a BR Class 35 "Hymek" Bo-Bo. 101 members of this class was built from 1961 to 1964. They were known as "Hymeks" because of their Mekydro-design hydraulic transmission units. They were withdrawn between 1971 and 1975, a short life caused by British Railways designating diesel-hydraulic locomotives non-standard following the withdrawal of steam. Four "Hymeks" have survived into preservation.

His initial number, 7101, is an in-joke: the Class 35 was only numbered up to 7100. As Beyer Peacock Ltd. were the only company to build the Class 35, all were built in numerical order. Therefore it is safe to say Bear was built after D7100, who entered service 5 February 1964.

Bear's Basis
Add a photo to this gallery

When he first arrived on Sodor, Bear was painted in the British Railways' Rail Blue with yellow warning panels. When he became part of the North Western Railway he was painted in the British Railways' Brunswick Green with a narrow band of lime along the bottom of his sides, cream window surrounds and small yellow warning panels. His number was painted on his cab sides in white (D7101) on his original livery and (D3) on his current livery.

James, Duck, D199 and D7101 at Tidmouth Sheds as illustrated by Gunvor and Peter Edwards

Henry and D7101 head to the Railway Works

Bear in his green livery pulling "the Limited" express

Bear, Henry and James as illustrated by Clive Spong
Add a photo to this gallery 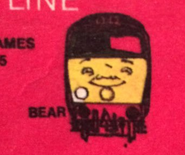 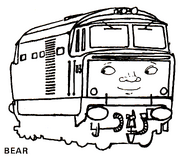 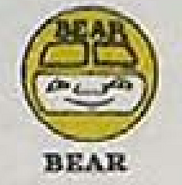 Bear's basis
Add a photo to this gallery

Rear of the ERTL D7101
Add a photo to this gallery