“Out of my way! Mail coming through!”
―Percy

Being Percy is a magazine story it was illustrated by using images from the television series. It was later published in the 2012 Holiday Annual.

Percy is feeling sad. None of his friends are listening to him because he is so small. Percy witnesses Gordon steam grandly through and decides to copy him. So he switches onto the express line. Percy soon gathers up speed and is going too fast to stop and collect the mail! Then, he sees Gordon approaching him on the same line! Gordon quickly swerves down a siding and collides with a barrier - ending up in the mud. Percy then brings Rocky to lift Gordon back onto the rails and delivers the mail. Later, the Fat Controller assures him that he is "perfect being Percy". Now, Percy is happy being himself. 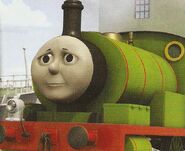 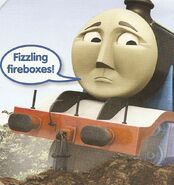 Add a photo to this gallery
Retrieved from "https://ttte.fandom.com/wiki/Being_Percy_(magazine_story)?oldid=1685449"
Community content is available under CC-BY-SA unless otherwise noted.