“Please let me past, Trevor! I am having a race with Thomas. We need to show that roads are better than tracks!”
―Bertie

Bertie and the Race

2004
Bertie and the Race is a magazine story illustrated using photographs from the television series.

Thomas is taking the children to their annual sports day. Thomas overhears one boy desiring to win a medal. Thomas thinks it must be splendid to win a medal. He later tells Bertie that he wants a medal, but Bertie tells Thomas he will have to win a race first. So they agree to start a race. Thomas nearly reaches the station, until he is flagged down at a level crossing. The Fat Controller is there and tells Thomas that the medals for the sports day have been left in his office. So Thomas goes to collect them. When he gets back the Fat Controller is very pleased to see Thomas. The Fat Controller then gives each of the winners a gold medal hanging from a red ribbon. The following morning, he is surprised to see Bertie and the children when they give him a home-made sports day medal. 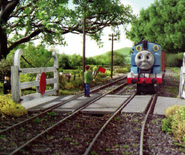 Add a photo to this gallery
Retrieved from "https://ttte.fandom.com/wiki/Bertie_and_the_Race?oldid=1728883"
*Disclosure: Some of the links above are affiliate links, meaning, at no additional cost to you, Fandom will earn a commission if you click through and make a purchase. Community content is available under CC-BY-SA unless otherwise noted.