Thomas the Tank Engine Wikia
Register
Don't have an account?
Sign In
in: Behind the Scenes, Images of Bill, Images of Ben, Images from behind the scenes

Bill and Ben/Behind the Scenes

Bill and Ben are fictional standard gauge twin tank locomotives created by the Rev. W. Awdry. They live and work at the Sodor China Clay Company, and carry the numbers 1 and 2 respectively.

They first appeared in The Railway Series book, Main Line Engines, which was published in 1966. Their last appearances was in Thomas and the Twins, published in 1989.

Front of Bill and Ben:

Rear of Bill and Ben:

Bill and Ben are based on the Bagnall 0-4-0STs Alfred and Judy.

In 1986, Bill and Ben were introduced in the second series of Thomas the Tank Engine & Friends and are regarded as the most iconic twin characters of the series along with Donald and Douglas. Unlike in the Railway Series, Bill and Ben are owned by Sir Topham Hatt and do not carry numbers.

In the eighth series, Bill and Ben were meant to appear in the episode, Thomas to the Rescue, but their scene was cut resulting in them being absent for a year. But they returned in the following series. For the majority of the eighth to twelveth series, they only appeared as minor characters. There have also been occasions where Ben appears without Bill.

When the show transitioned into full CGI in 2009, the twins were absent for four years. In 2013, Bill and Ben made their return in the seventeenth series.

From their return in 2013 until 2016, Jonathan Broadbent provided the voices for Bill and Ben in both the British English and American English dubs of the series. Following Broadbent's departure in 2017 or 2018, Tim Whitnall and Matt Wilkinson took over the roles of Bill and Ben in both dubs of Big World! Big Adventures!. While Wilkinson continued to voice Ben in the twenty-second series, Rasmus Hardiker took over the role of Bill from Whitnall in both dubs. All four voice actors gave Bill and Ben Birmingham accents.

Ben was consistently portrayed with a deeper voice compared to Bill. This carried over to Jonathan Broadbent's portrayal of the twins. Rasmus Hardiker gave Bill a higher pitched voice with a bolder tone, when Ben retained his somewhat softer vocals.

Bill and Ben's models were custom built with a perspex body shell and used a Märklin locomotive as a donor for the chassis and various parts. They were painted using glossy car body paint and lined with red automotive pinstripe tape with the letters on their saddle tanks were custom cut vinyl stickers.

In the second series, Bill and Ben's nameplates were made to be removable, which was required for the episode, The Diseasel, which centred around the twins playing a trick on BoCo to confuse him with their identical looks. Since the third series their nameplates were replaced with custom printed stickers.

Bill and Ben's wheels were sourced from a gauge 1 locomotive made by Märklin, the BR 80. The buffers were also from the BR 80.

In a behind the scenes picture of Bill's model during the second series reveals that the twins were to have numbers on their smokeboxes above their faces, as they did in The Railway Series. However, they were removed for unknown reasons once filming of The Diseasel began.

During the production of the sixth series Bill and Ben's paint was given a matte finish. In the episode, Buffer Bother, Ben's buffers were temporarily painted brass.

Bill's model with a number 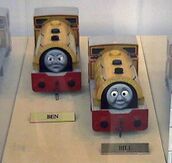 The twins' models on display in Japan in 2000

...which later had some teeth painted from the third series onwards all the way... (1991)

...until it last appeared in The Great Discovery having appeared in every series prior, excluding the fourth, eighth, tenth series, Thomas and the Magic Railroad and Calling All Engines! (2003, 2005, 2007-2008)

Bill and Ben's happy face, which first appeared in the second series... (1986)

...and later gained teeth from the third series onwards until the ninth series (1992-2005)

Bill and Ben's speechless face that appeared between the second and fifth series... (1986-1998)

...until the eyebrows were modified to resemble an annoyed face during the sixth series (2002)

...before it last appeared in the twelfth series episode, Gordon Takes a Shortcut (2008)

...until it last appeared in the eleventh series episode, Hector the Horrid! (2007)

Bill and Ben's smiling face that first appeared in a deleted scene of the eighth series episode, Thomas to the Rescue... (2004)

...but did appear in the tenth series Learning Segment, Help From Your Friends (2006)

Bill and Ben's grinning face that only appeared in the eleventh series episode, Dream On... (2007)

...and was also used as a reference to Ben's Bachmann HO scale model (2010-present) 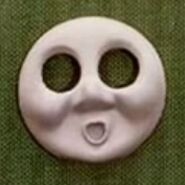 Bill and Ben's faces during production of the fourth series (1995)

Bill and Ben's faces during production of the sixth series (2002)

Bill and Ben's models were twice the size of their basis' in order to accommodate their eye mechanisms and motor. This was carried over to their CGI models.

In the fifth series episode, Double Teething Troubles, Bill and Ben were seen with lamps. They were powered by hidden battery packs.

During the production of the eighth series, the models had to go under some repair; Ben's model was refurbished with a new cab roof due to a huge crack.

Ben's model (Note: The huge crack on the cab roof)

The twelfth series marked the beginning of the show's transition into CGI and the characters' faces were animated through CGI with the aid of motion capture animation. The physical models' molded faces were replaced by white targets with triangles to fix a computer-animated face in post-production. Ben’s resin faces were only used in background shots.

Bill and Ben’s models are now currently on display at the Hara Model Railway Museum in Japan.

In 2009, the series introduced Computer-Generated Imagery (CGI) as a replacement for the show's long-standing live-action models. In 2013, Bill and Ben were created in CGI by Arc Productions. The model was "hand-sculpted" in Maya, a 3D animation and modelling software.

Bill and Ben have had modifications throughout the CGI series. These include: 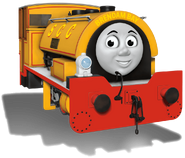 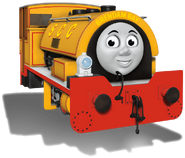 Recoloured versions of Bill and Ben were made for the episode, Bill or Ben?. They were repainted dark blue with dark blue wheels, yellow lining and yellow lettering.