“You know, I sometimes call them The Bees."
"A good name. They're terrors when they start buzzing round.”
―Duck and BoCo discussing Bill and Ben[src]

Bill and Ben are yellow saddle tank engine twins belonging to the Sodor China Clay Company. They work in the china clay works and at Brendam Docks, where they shunt trucks.

One day, Bill and Ben returned from shunting some trucks to find that some other trucks they had shunted earlier were missing. Their drivers - after examining a puddle of oil on the ground - concluded a diesel was responsible. After the twins argued over who brought the "diseasel" into the yard, the drivers suggested they go looking for the diesel. The twins were horrified at the possibility that the "diseasel" might magic them away as he did with the trucks, but their drivers quickly persuaded them otherwise and so they set off.

At last, the twins found the "diseasel". While Ben ran behind, Bill confronted the "diseasel" over the theft. The "diseasel" claimed the trucks were his and ordered Bill to "go away"; Bill pretended to be frightened and slunk away, remarking, "You'll be sorry". With that, Ben ran up and accused the "diseasel" of being a "truck stealer", before running back so Bill could run up again. This continued until the "diseasel" - under the impression that there was only one very swift and annoying saddletank - became so giddy that his eyes "nearly popped out", just as the twins puffed up beside him. The "diseasel" was initially confused, but then laughed at his ignorance. When Edward arrived moments later (inquiring as to why Bill and Ben were not shunting), the twins angrily claimed that the "diseasel" snuck into their yard and stolen their trucks. Edward soon realised what was going on and explained the situation. The twins became embarrassed and apologised to the diesel, who asked to be called BoCo and then left to shunt some more trucks, leaving Edward and BoCo to laugh about the incident.

A few days later, after BoCo took the Express in James' absence, Edward recounted what Gordon had said about branch lines to the twins. The next morning, after Gordon ended up at Brendam after a series of events involving poor preparations and a large floppy green hat, the twins sneaked up beside him and loudly recounted what Gordon had said about branch lines. Concluding that the engine beside them could not be Gordon, the two declared he was nothing more than a pile of old scrap-iron and began to contemplate what they should do (Bill was all for sending Gordon to be scrapped, while Ben favoured the more humane option of dumping him in the sea), all the while ignoring Gordon's protests until BoCo arrived. Gordon begged him to save him and so BoCo threatened the twins to leave with the trucks he had brought. The twins quickly left, leaving Gordon with BoCo. BoCo wisely neglected to tell Gordon the twins were joking.

Sometime later, a group of enthusiasts came to visit the railways of Sodor. When Edward brought them to Brendam, the twins took them to the China Clay Workings in a brake van special.

In 1988, Thomas was sent to work on Edward's Branch Line while repairs were carried out on a bridge on Thomas' branch line. The twins were quick to tease him about his colour, but Edward was savvy enough to send the twins away before an argument broke out. The twins later teased Thomas after seeing him covered in dairy from a collision with a farm lorry until Edward announced a party of enthusiasts were coming and threatened that he would not bring them to see the twins. The twins became excited and instead decided to worry about their own paint - for example, how clean it was - although one day, when the drivers remarked that "the enthusiasts would not eat their dinner off them", Bill quipped that "They might if [they] were Thomas".

When at last, the enthusiasts did arrive, a photographer with an "instant" camera began harassing Ben by continuously taking pictures of him, even after the remainder of the crowd went to watch Bill tug a boat into deeper waters. At last, the photographer prepared to take one final picture, just as Bill's driver arrived to ask for assistance. Ben's driver turned on the steam just as the photographer took the picture; disgusted with the poor quality of the shot, he abandoned it on the floor and left. The picture was later discovered by Bill's driver after the two rescued the boat.

The repairs to the bridge took a long time and Thomas was still at Brendam when the rainy season came. At the "Drain" (a hollow in the land where rainwater collected), the water even began to come near the rails, although no one took much notice. One particularly wet day, as Ben returned from the Workings, the wind whipped the rainwater into a wave that swamped him, dousing his fire. His fireman went for assistance and brought Thomas to help. While Thomas dragged Ben out, Bill took away the trucks. When at last the water subsided four days later and Bill returned to Brendam, the two made a pact to never tease Thomas again.

Bill and Ben are Sodor's most mischievous saddle tank engine twins, who have great fun in teasing and playing jokes on other engines of the railway. They enjoy attention and love taking visitors and being photographed. They tend to work together, like most twins, but even this youthful pair can have their arguments among themselves and can squabble with one another - particularly about whose fault one of their follies was. They are highly prone to playing tricks and being cheeky. There is no real harm to them, but even Edward admits that they are maddening at times. Bill appears to be the quicker-witted leader, while Ben seems to be the follower of the pair.

Bill and Ben are based on the Bagnall 0-4-0STs "Alfred" and "Judy" of Par, Cornwall, who are both preserved and in working order at the Bodmin and Wenford Railway. According to the foreword of Thomas and the Twins, Alfred and Judy are both Bill and Ben's twins.

Alfred was once repainted yellow for a Days Out with Thomas event, to resemble Bill. 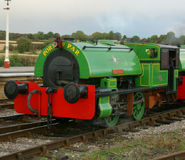 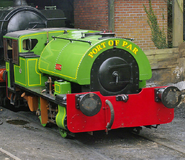 Their drivers examined a patch of oil.
"That's a diesel!" they said.
"It's a what'll?" asked Bill.
"A Diseasel, I think!" replied Ben. "There's a notice about them in our shed".
"Coughs and sneezles spread diseasels!"
"You had a cough in your smokebox yesterday! It's your fault the Diseasel came!"
"It isn't!"
"It is!"
"Stop arguing you two!" laughed their drivers.”
―Bill and Ben arguing, "The Diseasel", "Main Line Engines".

Bill and Ben as illustrated by Gunvor and Peter Edwards

Bill and Ben's numbers and nameplates being removed

Bill and Ben as illustrated by Clive Spong

Ben in The Drain

Bill and Ben in a Railway Series pop-up book

Bill and Ben in The Railway Series: Surprise Packet