“If all those bones are anything to go by, Billy had a good holiday, too!”
―Thomas

Billy's Bones! is a read and colour magazine story.

One day, as Thomas pulls into the station, he spies a family with their dog on the platform. The dog's name is Billy and he loves chewing on bones. The family are off on holiday but a while later Thomas spots them on the platform again, without their dog. Billy had run off. Everyone agrees to help find Billy, even the Fat Controller who puts posters all over the Main Station. The family is getting more and more worried because their holiday is coming to an end and they have not found Billy. But, a man sees the posters and he has Billy. The man is a butcher, and the dog had run into his shop and was taking the bones he had thrown away. The family was delighted to have their dog back again. 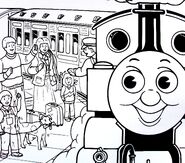 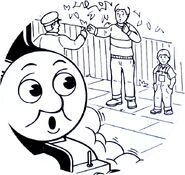 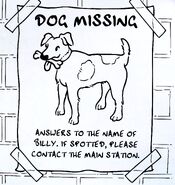 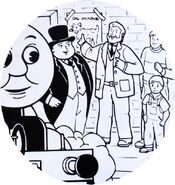 Add a photo to this gallery
Retrieved from "https://ttte.fandom.com/wiki/Billy%27s_Bones!?oldid=1685661"
Community content is available under CC-BY-SA unless otherwise noted.