Bird Talk is a magazine story.

Early one morning, Thomas is ready for work, but his fireman has not arrived. The driver is worried; the fireman has never been late before. Moments later he arrives holding an empty birdcage; his parrot, Chatterbox, has escaped. Thomas promises to keep a lookout for him.

Meanwhile, Gordon is waiting at the station with his express coaches. A voice from the announcer's speaker calls out that Gordon is late. Gordon panics and sets off, without his coaches and passengers. On another platform, station staff and passengers are being told to hurry. Chaos ensues as passengers bump into each other, trying frantically to board their trains.

Thomas guesses the problem as a feather flutters out of the office window. It is Chatterbox. He had flown into the announcer's office and was speaking into the microphone. 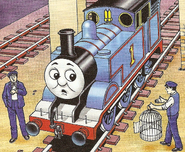 Add a photo to this gallery
Retrieved from "https://ttte.fandom.com/wiki/Bird_Talk?oldid=1748524"
*Disclosure: Some of the links above are affiliate links, meaning, at no additional cost to you, Fandom will earn a commission if you click through and make a purchase. Community content is available under CC-BY-SA unless otherwise noted.