The Blastbooster-7 was an invention for The Technology Fair invented by Professor Friedrich. It is a triple-thruster jet engine mounted on a flatbed.

The Blastbooster-7 was delivered to Brendam Docks for Thomas to deliver to Ulfstead Castle. Professor Friedrich was worried that it could have been damaged while it was being unloaded, despite Cranky assuring him that he is always careful while doing his job. The professor starts inspecting the control panel to make sure the device is working properly, but in doing so accidentally causes it to speed off with him still on it. Thomas gives chase and manages to catch up to the device and slow it down enough for the professor to safely reach the controls and switch it off, allowing Thomas to stop inches before they crashed into a cow. The device was then delivered to the Technology Fair safe and sound.

After Baz and Bernie stole the plans for Ruth's Hover-Car, they hijacked Kenji for use as a getaway vehicle. As the visitor was faster than he was, Thomas used the Blastbooster-7 to catch up to the runaway engine. Though he was delayed by Bernie uncoupling Kenji's coach, Kenji was slowed down by Ruth, Sir Robert Norramby and Sir Topham Hatt using some of the other inventions from the fair. The device was ditched once Thomas got ahead of the electric engine with its fate left unknown.

Professor Friedrich hanging onto the Blastbooster-7

The Blastbooster-7 at full thrust 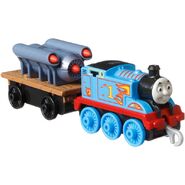 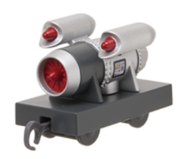 Capsule Plarail
Add a photo to this gallery
Retrieved from "https://ttte.fandom.com/wiki/Blastbooster-7?oldid=1961955"
*Disclosure: Some of the links above are affiliate links, meaning, at no additional cost to you, Fandom will earn a commission if you click through and make a purchase. Community content is available under CC-BY-SA unless otherwise noted.