“Blondin Bridge is falling down!”
―A workman, Blue Mountain Mystery

Blondin Bridge is a bridge above the Blue Mountain Quarry that collapsed whilst Rheneas was travelling over it. Paxton had to be repaired as a result of bricks landing on and damaging him. It was repaired by the end of Blue Mountain Mystery.

Skarloey on top of the bridge 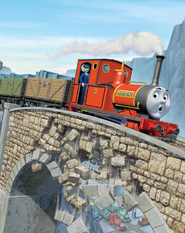 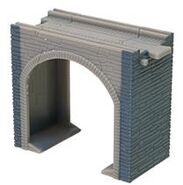 Capsule Plarail
Add a photo to this gallery
Skarloey Railway
* RWS only | ** T&F only
Retrieved from "https://ttte.fandom.com/wiki/Blondin_Bridge?oldid=1693735"
Community content is available under CC-BY-SA unless otherwise noted.