Thomas and the Bluebird

Thomas and the Bluebird

Bluebird is Farmer Collett's old oil tank which is also home to a rare bluebird. The rare bluebird initially made its nest in Thomas' funnel and in an effort to trick the bird into moving on, the oil tank was decorated by Farmer Collett to resemble Thomas. The plan worked and the bluebird now happily lives in the chimney pot. It was Thomas' idea to name the oil tank Bluebird after its resident. 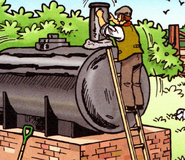 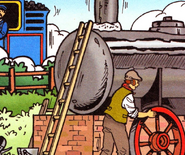 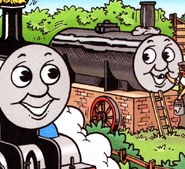 Add a photo to this gallery
Magazines & Annuals
Non-rail vehicles
* RWS only | ** T&F only | *** Other Media only
Retrieved from "https://ttte.fandom.com/wiki/Bluebird?oldid=1691499"
Community content is available under CC-BY-SA unless otherwise noted.