“For a diesel, yon BoCo's nae sich a bad sort of engine.”
―Donald and Douglas's remark about BoCo[src]

BoCo is a green mixed-traffic diesel engine, who primarily works on Edward's Branch Line and occasionally on the Main Line.

BoCo was built for British Railways on 29th September 1958, and along with the rest of his class worked in the Barrow-in-Furness area from 1962. In 1965 he found his way to the Brendam Branch Line. Sir Topham Hatt expressed interest in buying him, and British Railways allowed him to keep the engine for trials. These proved satisfactory, and BoCo was purchased.

BoCo once accidentally took Bill and Ben's China clay trucks. The twins decided to play a trick on him, playing on their identical looks to make the diesel think that one engine was vanishing and reappearing around him. Edward was nearby to sort out the confusion and Bill and Ben soon came to respect BoCo.

Duck, who was suspicious of diesels due to his own experience, nevertheless took quickly to BoCo when the diesel took trucks to Tidmouth and found out that he was good friends with Edward. The two started talking in the shed, but were interrupted when James arrived and called BoCo a "buzz box." Ironically, James was attacked by a swarm of bees the next day and so BoCo had to take the Express. Although things had smoothed over between James and BoCo, Gordon was furious that a mere branch line diesel got to pull a mainline train. Gordon was later stranded on Edward's branch line due to a signalmen's error. Bill and Ben were quick to tease Gordon and jokingly threatened to haul him away as scrap or dump him into the harbour. When BoCo arrived with some trucks, he sent Bill and Ben to work and the relieved Gordon felt he owed his life to BoCo.

When Edward had trouble pulling an enthusiasts' train, BoCo helped Duck to shut the big engines up, who said Edward should be preserved. BoCo later filled in on the branch line while Edward was at Crovan's Gate Works. Donald and Douglas were the last engines to accept BoCo.

BoCo showed Diesel 40125 around but abandoned him when the new diesel insulted the Fat Controller for keeping steam engines in service.

BoCo tried to cheer Gordon up when he got into trouble for spraying ashes onto a wedding party and later helped him to Barrow-in-Furness when his fire bars collapsed. BoCo also helped Edward to the Works when his bogie wheel snapped off and ran the branch line while Edward was undergoing an overhaul. BoCo met Victoria when Edward stopped at Wellsworth with her while being brought back to service on Thomas' Branch Line and later laughed at Donald after his accident with a set of buffers.

BoCo is a tame diesel engine, who is sensible, kind, and has a decent sense of humour. He is also very disciplined, as seen as he stops Bill and Ben from their pranks. Upon his arrival, he was unfortunate enough to be set upon by the mischievous Bill and Ben, when, thinking he had intentionally stolen their trucks, they pretended to be one engine and nearly made his eyes pop out. BoCo is now wise to the tank engine twins' pranks though he still somewhat humours them to a point. He is also good friends with Bill, Ben, Edward, and Duck. He is a true friend and is often willing to stick up for the underdog. BoCo is firm, but fair and friendly in his nature, not being afraid to speak his mind. Even Gordon soon thought of him in high regard when he "saved" him from Bill and Ben's antics. BoCo upholds a more praiseworthy and respectable, likeable image for diesel engines everywhere, being happy to show the more pompous steam engines that diesels have their uses. BoCo helps bring good order across Edward's Branch Line, even occasionally pulling Main Line trains, as the Fat Controller recognises how versatile he is.

BoCo is based on a British Rail (BR) Class 28 Co-Bo diesel-electric engine. These engines were initially used on the "Condor" express freight services but the class's Crossley engines quickly proved problematic. They suffered frequent failures, and in 1961 the entire class was handed back to the manufacturer for remedial work on the engines, and to cure problems with cab windows falling out while running. Upon return to service in 1962, all members of the class were allocated to Barrow-in-Furness. BoCo was susceptible to the mechanical failures of his class - according to the Awdrys, however, the Fat Controller eventually found a fix to prevent these malfunctions. The real engines were not so fortunate, and most were withdrawn and scrapped by 1969.

BoCo's number belonged to a real BR Class 28. The real D5702 was built on 29th September 1958, and was withdrawn on 7th September 1968, before being scrapped at J. Cashmore Scrapyards the following year.

In the annuals, BoCo mentions a brother of his - D5705, a real preserved engine, who is the last surviving Class 28. In another annual, BoCo claimed to have a twin called "CoBo" in order to play a trick on Bill and Ben. D5701 is also based on this class of engine.

BoCo is painted in the British Railways (BR) Deep Bronze green livery with a lime green stripe on both sides and small yellow warning panels on his front and back end. His number (D2, previously D5702) is painted underneath his end 1 side windows in white. He has red bufferbeams.

“...Even you don't come in our yard without asking. And you only take the trucks we give you. But," they both squeaked indignantly, "This 'diseasel' didn't even ask. He just took the lot!"
"There is no cause to be rude"
said Edward severely. "This engine is a Metropolitan-Vickers, diesel-electric, Type 2."
The twins were abashed. "We're sorry Mr-er..."
"Never mind," he smiled, "call me BoCo. I'm sorry I didn't understand about the trucks.”
―Edward introduces BoCo to Bill and Ben after some confusion, "The Diseasel", Main Line Engines

“For a diesel, yon BoCo's nae sich a bad sort of engine."
"That from the Caledonian twins is high praise indeed.”
―Donald and Douglas, the last to accept diesels, praise BoCo, "Edward's Exploit", Main Line Engines

BoCo in his first appearance

BoCo as illustrated by Gunvor and Peter Edwards

BoCo with the number D5702 in the Railway Series

BoCo, Duck and Donald and Douglas

BoCo and Gordon at Vicarstown

BoCo and Edward at Wellsworth

BoCo in Thomas and the Missing Christmas Tree

Percy, Mavis, Diesel and BoCo in an annual 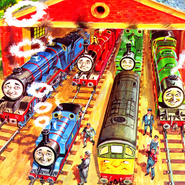 BoCo in a Thomas & Friends annual illustration by Edgar Hodges

BoCo as depicted in The Railway Series: Surprise Packet