“There's no real harm in them, but they're maddening at times.”
―Edward

Thomas the Tank Engine
and Friends 24

BoCo the Diseasel is a magazine story.

Bill and Ben are twin tank engines with four wheels, a tiny chimney and dome and a small squat cab each. They keep busy pulling the trucks of china clay on the main line to the ships in the harbour. One day the twins shunt some trucks and go off for more, but when they come back - the trucks they had shunted are gone! All that is left is a patch of diesel oil and the twins are puzzled about it - believing it as "the diseasel". Their drivers tell them that they should go and get their trucks back from the diesel.

They also tell the twins that they should take away their names and numbers to make the diesel think that they are the same engine. The twins then set off to find the diesel. Sure enough they both find the diesel on a siding with the missing trucks and while Ben hides behind - Bill goes boldly alongside the diesel and asks him if he can have his trucks back. But the diesel denies the request and tells Bill to go away. Bill pretends to be frightened and hides away behind the trucks - then Ben comes forward on the other side. And as Ben runs away, Bill takes his place and it continues until the diesel begs each one to stop as his eyes nearly pop out!

Soon the diesel realises that the two identical engines are in fact twins and groans, then Edward arrives and wonders what the twins are playing at. The two engines tell him that the diesel took their trucks without asking, but Edward reassures them that the diesel is a "Metropolitan Vickers Diesel-Electric, type two". Bill and Ben are abashed and the diesel introduces himself as BoCo, who also apologises for not understanding about the trucks. As the twins scamper away, Edward reassures BoCo that there is no harm in the pair - but they are maddening at times. 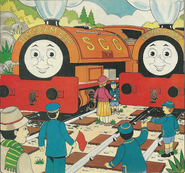 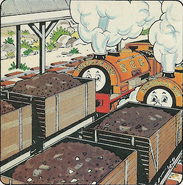 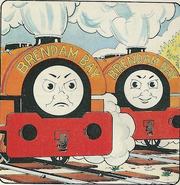 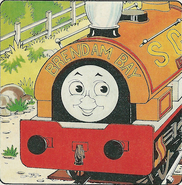 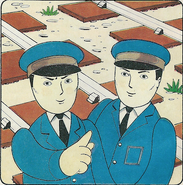 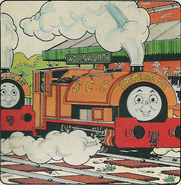 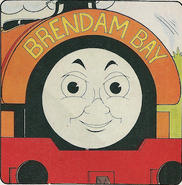 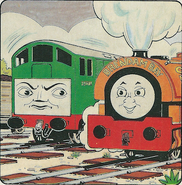 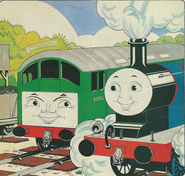 Add a photo to this gallery
Retrieved from "https://ttte.fandom.com/wiki/BoCo_the_Diseasel_(magazine_story)?oldid=1688021"
*Disclosure: Some of the links above are affiliate links, meaning, at no additional cost to you, Fandom will earn a commission if you click through and make a purchase. Community content is available under CC-BY-SA unless otherwise noted.