“I have to rescue him!”
―Skarloey

Brave Skarloey is a magazine story, illustrated using photographs from the television series.

A long time ago, Skarloey nearly came to a sticky end when he rolled onto an old bridge that had been damaged during a storm. Skarloey dangled dangerously over the water before Rheneas arrived and pulled him to safety.

Weeks later, the Fat Controller visits the sheds with news that the bridge has finally been repaired. He needs Skarloey to fetch some trucks on the other side. Skarloey reaches the bridge, but he is so scared that he races back home. Rheneas kindly offers to collect the trucks for Skarloey.

Now, Rheneas has lots of trucks to collect. He puffs so hard that he runs out of water. When Skarloey hears the news, he is determined to help his friend. Skarloey puffs onto the creaking bridge. Finally, Skarloey makes it to Rheneas and is coupled up. Skarloey then pulls his grateful friend to safety.

Now, Skarloey isn't afraid of the bridge and everyone tells the tale of the brave little engine. 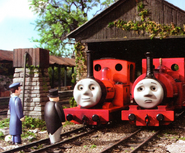 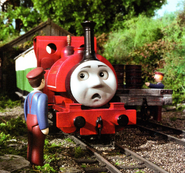 Add a photo to this gallery
Retrieved from "https://ttte.fandom.com/wiki/Brave_Skarloey?oldid=1685690"
*Disclosure: Some of the links above are affiliate links, meaning, at no additional cost to you, Fandom will earn a commission if you click through and make a purchase. Community content is available under CC-BY-SA unless otherwise noted.