Thomas the Tank Engine Wikia
Register
Don't have an account?
Sign In
Advertisement
in: Stations, Landmarks, Other railways,
and 5 more
English

“Where are you from?"
"Oh, Brighton, on the Mainland.”
―James asking Thomas, The Adventure Begins

Brighton is a seaside resort and the largest part of the City of Brighton and Hove situated in East Sussex, England. Historically in the Rape of Lewes in Sussex, Brighton forms a part of the Brighton/Worthing/Littlehampton conurbation. Brighton is at the heart of the Greater Brighton City Region, a partnership of local authorities and other organisations that signifies Brighton's wider regional economic significance.

Over half of the city's area is open downland, most of which lies within the South Downs National Park and forms part of the UNESCO-recognised Brighton and Lewes Downs biosphere reserve.

Archaeological evidence of settlement in the area dates back to the Bronze Age, Roman and Anglo-Saxon periods. The ancient settlement of "Brighthelmstone" was documented in the Domesday Book (1086). The town's importance grew during the Middle Ages as the Old Town developed, but it languished in the early modern period, affected by foreign attacks, storms, a suffering economy and a declining population. During the modern period, Brighton began to attract more visitors following improved road transport to London and becoming a boarding point for boats travelling to France. The town also developed in popularity as a health resort for sea bathing as a purported cure for illnesses.

In the Georgian era, Brighton developed as a fashionable seaside resort, encouraged by the patronage of the Prince Regent (later King George IV), who spent much time in the town and constructed the Royal Pavilion during the early part of his Regency. Brighton continued to grow as a major centre of tourism following the arrival of the railways in 1841, becoming a popular destination for day-trippers from London. Many of the major attractions were built during the Victorian era, including the Grand Hotel, the West Pier, and the Brighton Palace Pier. The town continued to grow into the 20th century, expanding to incorporate more areas into the town's boundaries before joining the town of Hove to form the unitary authority of Brighton and Hove in 1997, which was granted city status in 2000.

The city has several railway stations and in 1840, a workshop for the London and Brighton Railway was set up. The works were expanded after being taken over by the London Brighton and South Coast Railway and the buildings served steam locomotives until they were closed by British Railways in 1962 and demolished in 1969.

Thomas mentions this city in The Adventure Begins when he first arrives on the Island of Sodor, telling James about this place from where he was built and previously lived to work at.

Stepney, Boxhill and their siblings were also built here. Other real-life engines built at Brighton include LB&SCR E4 class Birch Grove, as well as LB&SCR B1 class Gladstone, which is preserved today at the National Railway Museum. 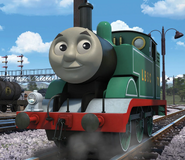 Brighton's locomotive works and railway station
United Kingdom
* RWS only | ** T&F only
Deutsch Español Русский
*Disclosure: Some of the links above are affiliate links, meaning, at no additional cost to you, Fandom will earn a commission if you click through and make a purchase. Community content is available under CC-BY-SA unless otherwise noted.
Advertisement