“Sorry I was so boastful and annoying!"
"That's all right. I've been naughty, too!"
"Of course you have. We're twins!”
―Ben and Bill

Buffer Bother! is a magazine story, it was illustrated by using photographs from the television series.

The Fat Controller occasionally comes to the quarry to inspect Bill and Ben. One day he finds that Ben has broken buffers and sends him for repairs, leaving Bill to work with Mavis. Ben is pleased, but Bill is not. He thinks that if his twin gets brand new buffers, he should too. When Ben puffs off to the Works laughing, Bill is left feeling very cross and sorry for himself. Bill gets into such a temper thinking about Ben's new buffers that he falls behind with his work. Mavis tells Bill to be happy that he is in good working order, but Bill just scowls and blows soot all over Mavis.

The troublesome trucks notice Bill's angry demeanour and tease him even more. Bill charges towards the trucks, but they just laugh and push him off the rails and into a pile of stones. The Fat Controller arrives to find Bill in the stones with broken buffers. He refuses to let Bill have new buffers until he behaves himself again. As the Fat Controller leaves, Ben rolls up with his shiny, new, golden buffers. Ben apologises for boasting and Bill admits to being naughty too. Ben laughs and says that it is because they are twins. 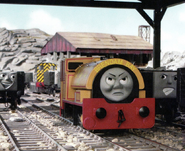 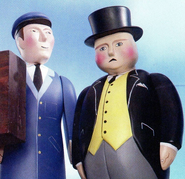 Add a photo to this gallery
Retrieved from "https://ttte.fandom.com/wiki/Buffer_Bother!?oldid=1685877"
Community content is available under CC-BY-SA unless otherwise noted.