Thomas the Tank Engine Wikia
Register
Don't have an account?
Sign In
Advertisement
in: Non-rail vehicles, The Little Western, Buses,
and 8 more
English

Bulgy is a bad-tempered double-decker bus with an ideological opposition to railways. His favourite phrase is "Free the roads!"

Bulgy despised railways and believed that they would eventually be completely replaced by roads. He even carried a poster on his side telling people to "JOIN THE ANTI-RAIL LEAGUE." His slogan was "free the roads!"

Bulgy once attempted to steal Duck and Oliver's passengers by pretending to be a railway bus. He was determined to get them to Tidmouth before Duck could, but he got stuck under a bridge after trying to take a short cut. After Duck safely got his passengers across the bridge and took them to their destination, Bulgy's lies were exposed. He was subsequently turned into a henhouse and placed near the bridge, which is now nicknamed Bulgy's Bridge.

As in the Railway Series, Bulgy attempted to steal Duck and Oliver's passengers but got stuck under a bridge. Eventually, he was converted into a henhouse and placed near the said bridge.

Bulgy was later given a second chance and brought back to the road to help with passengers while Thomas and Emily needed repairs. However, his driver brought him back to his field for the night after he was restored and the chickens who had lived in him nestled on his luggage racks and caused trouble the following morning. Under Emily's suggestion, he decided to become a mobile vegetable stand. Bulgy enjoyed his new green livery and his work delivering vegetables — they do not lay eggs and they never complain. Throughout the rest of the model series, Bulgy made few appearances in both his green and red liveries.

Bulgy returned in the twenty-first series, much to Thomas' confusion, to which Bulgy explained that he was put back into service; this was to help Thomas while Bertie was being mended. Bulgy expressed his belief that it would be better if passengers simply used roads instead of railways, but Sir Topham Hatt reminded him not to return to his anti-rail ways, lest he find some chickens that needed a place to stay, so Bulgy relented and apologised.

Once, Bulgy accidentally caused a chain reaction that catapulted a bag of soil into a nearby water tower and contaminated the water that Thomas took on. Bulgy was the only one to witness, but instead of telling Thomas not to take it, he decided to use it to his advantage as an opportunity to take more passengers while the engines became ill and unable to work. When Bertie's engine was damaged due to the amount of passengers he was carrying, Bulgy offered to take his passengers for him. However, Bulgy took on more than he thought he could handle and eventually broke his axles. The engines were soon well enough to work and much to Bulgy's dismay, he had to be taken to the repair garage by Thomas.

Bulgy was at first very grumpy, formerly cold-hearted and cynical double-decker bus who firmly believed that roads are superior to railways and would occasionally lie to get himself out of trouble. After being restored, he saw the error of his ways and changed his attitude.

Nowadays, he means well and works hard, and while he still believes passengers should travel by road—if the chance comes, he is willing to take advantage of an engine's inability to take passengers, even if it means sabotaging them if he thinks he can get away with it. However, Sir Topham Hatt keeps a close watch on him and makes sure that he is on his best behaviour, gently reminding Bulgy about what happens when he is not. Bertie also serves to mediate his opposing personality.

According to the "Character Cube" bonus features of several US DVDs, Bulgy has no scruples and knows how to tell a lie when he is in a tight jam and is good friends with Diesel.

Bulgy is based on an AEC Bridgemaster double-decker bus. his friend, the Special Bus Service and the Australian Buses are also members of this class. 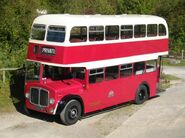 Bulgy was originally painted scarlet and cream, but after becoming a vegetable bus he was painted green and cream. Prior to this, he had a sign on his left side reading "RAILWAY BUS" and another sign on his right side reading "JOIN THE ANTI-RAIL LEAGUE" - this was replaced with another "RAILWAY BUS" sign when he was restored. He also has signs on his front and back, reading "FREE THE ROADS" and a nameplate above his rear door. When he was repainted, the signs on his sides were replaced with green ones reading "MOBILE GROCERY STORE" in white. In a tenth series Learning Segment, he was repainted back into his original scarlet and cream livery. In the Railway Series, his face is black but in the series, he has a traditional grey face. In the Railway Series, when he was turned into a henhouse, his right side read "BALEFUL RUST" and had "BULGY" chalked in right on his body.

In one scene of Best Dressed Engine, Bulgy is incorrectly portrayed with Bertie's Harvey to the Rescue and Lorry 2’s horn.

“The bus watched the passengers happily milling round the Small Railway
"Stupid nonsense! I wouldn't have brought 'em if I'd known. I'd have had a breakdown or something".
"I'm glad you didn't",

smiled Duck. "You'd have spoilt their fun. Look how they're enjoying themselves!"
"Pah!"
snorted the bus. "Enjoyment's all you engines live for, taking the petrol from the tanks of us workers. Come the revolution", he went on fiercely, "railways'll be ripped up. Cars 'and coaches'll trample their remains. Free the roads from Railway Tyranny!”
―Bulgy argues to Duck and talks about the 'Road Revolution', "Bulgy", "Oliver the Western Engine"

“Duck's train was to be first out, but he had few passengers. He was soon to know why!
"Look!" shrilled Oliver. "Look at Bulgy! He's a mean Scarlet Deceiver!"
Bulgy had turned to leave. They could now see his other side. It had on it RAILWAY BUS.
"Stop!" yelled Staff and engines; but too late.
"Yah! Boo! Snubs!" jeered Bulgy.
He roared away. The unsuspecting passengers waved happily.
"Come on!" puffed Duck.
He, Alice and Mirabel trundled unhappily away. Alice and Mirabel chattered crossly.
The nasty old thief, he's stolen our people!”
―Bulgy steals Duck and Oliver's passengers, "Bulgy", "Oliver the Western Engine"