"Bulgy's Field" is the nickname given to a field where Bulgy was placed after being made into a hen house, regarding his incident under the nearby bridge. Bulgy was later removed from the field for use as a vegetable bus, in Bulgy Rides Again. The field is on a hen farm, which suggests why Bulgy was made into a hen house. After Bulgy left the field, some hen pens were constructed for the hens to live in.

In the Railway Series, it was located north of Haultraugh, apart from the bridge, which was located south of the station.

Oliver and Bulgy
Add a photo to this gallery

Bulgy, the cricketers and Caroline 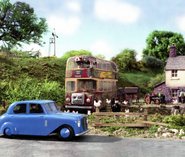 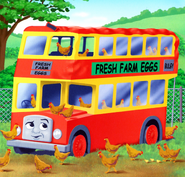 Bulgy's Field in a Story Library book
Add a photo to this gallery
The Little Western
* RWS only | ** T&F only | *** Other Media only
Retrieved from "https://ttte.fandom.com/wiki/Bulgy%27s_Field?oldid=1764386"
*Disclosure: Some of the links above are affiliate links, meaning, at no additional cost to you, Fandom will earn a commission if you click through and make a purchase. Community content is available under CC-BY-SA unless otherwise noted.