Bulldog is the forty-eighth Buzz Book, based on the fourth series episode of the same name. It is illustrated using photographs from the television series.

Falcon is rude to Duke and he carelessly bounces off the track and is left hanging over the cliffside. Duke's quick-thinking nature saves Falcon who is sorry for being so rude. 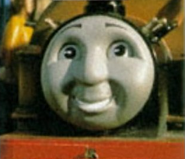 Add a photo to this gallery
Retrieved from "https://ttte.fandom.com/wiki/Bulldog_(Buzz_Book)?oldid=1730271"
*Disclosure: Some of the links above are affiliate links, meaning, at no additional cost to you, Fandom will earn a commission if you click through and make a purchase. Community content is available under CC-BY-SA unless otherwise noted.