Bulstrode is a highly disagreeable barge. He now resides at Tidmouth Beach as a children's play area.

Bulstrode was used to carry cargo like coal and stone to Knapford Harbour but always complained about not being loaded fast enough. This annoyed the trucks, but one day Bulstrode ended up getting what he deserved when Percy accidentally pushed stone trucks off the quay and into his hold, bursting a hole in his hull. He was then towed to a beach, where he was turned into a children's play area. He remains there today, most likely still grumbling.

Bulstrode is based on a 1920s self-propelled coastal barge. 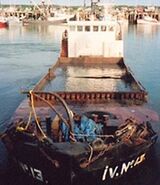 Bulstrode's basis
Add a photo to this gallery

Bulstrode is painted with a cream cab, brown deck, a black hull and a red keel. His name is painted on his bow in white. In the "My First Thomas" range he is painted blue, red and yellow.

Non-rail vehicles
* RWS only | ** T&F only | *** Other Media only
Ffarquhar Branch Line
* RWS only | ** T&F only
Retrieved from "https://ttte.fandom.com/wiki/Bulstrode?oldid=1811238"
*Disclosure: Some of the links above are affiliate links, meaning, at no additional cost to you, Fandom will earn a commission if you click through and make a purchase. Community content is available under CC-BY-SA unless otherwise noted.