Buses are road vehicles that can transport many passengers.

Many of the buses on Sodor are owned by Sodor Roadways and provide a connection to the railways by picking up and dropping off passengers. There are several known buses, such as Bertie, Bulgy and Algy.

A double-decker bus was at Elsbridge when Thomas and Gordon were talking. [1]

When Percy collided into the luggage trolley, a double-decker bus was seen on the bridge above. The bus had an advertisement for The Railway Series book, Troublesome Engines. [2]

Toby's Old Tramway went bankrupt due to the buses taking over Toby's work. One of these buses was a green bus.[3]

Two single-deckers buses were at Knapford Bus Yard when Thomas and Bertie were talking. [4]

Buses are seen at the various stations around Sodor, such as Tidmouth and Tidmouth Hault, where they drop off and pick up passengers.

Two double-decker buses were introduced; the Special Bus Service and the The Open-Topped Double-Decker Bus. A single-decker hospital bus was also introduced.

A bus with a digital sign reading 401 was at Wellsworth Bus Yard while Bertie was having snow removed from him. [8]

Many of the double-decker buses are based on AEC Bridgemaster buses. Bulgy, his friend, the Special Bus Service and the Australian Buses are also based on this bus. 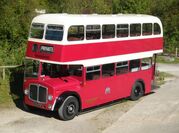 In the television series, the buses owned by Sodor Roadways are painted red with silver hubcaps. A double-decker bus once seen at Elsbridge and one seen at the Wellsworth Vicarage Orchard are both painted lime green.

In the magazines and annuals, the buses are painted in different liveries, such as red, blue and orange. One of the red buses has an arrow painted on its sides in yellow.

In the My Thomas Story Library book, "Toby", a red bus has cream window surrounds along with a curved cline painted on its sides in cream. A bus is painted maroon in the book from the same series, "Edward".

The red livery is based on the famous red bus livery used by London Transport.

Non-rail vehicles
* RWS only | ** T&F only | *** Other Media only
עברית 日本語 Polski Русский
*Disclosure: Some of the links above are affiliate links, meaning, at no additional cost to you, Fandom will earn a commission if you click through and make a purchase. Community content is available under CC-BY-SA unless otherwise noted.
Advertisement