Byron is a large bulldozer with a big blade. He carries out bulldozing work along with levelling the ground.

In his first appearance, Byron was helping to clear room for new railway lines at the quarry. On Jack's first day, he scooted towards the bulldozer and eagerly wanted to help him. But Byron said he did not need any help and conceitedly asked him to help Kelly the Crane.

When the machines were arguing about who was the most important, Byron replied to Jack that levelling the site was important because that was what he did. When Max and Monty's reckless behaviour caused a water supply pipe to burst, Alfie became trapped in thick mud. By using his blade, Byron pulled Alfie out of the mud to safety.

Byron is a boisterous bulldozer with a big blade. He likes nothing better than showing the other machines on how to get the job done. He is very proud and does not like to waste his talents on jobs he feels are beneath his stature. Byron is the envy of all the other vehicles...or, at least, he thinks he is. He has a booming voice and likes to work hard. Never the less, Byron is always enthusiastic, reliable and wise.

Byron is based on a Caterpillar bulldozer from the late 1930's. 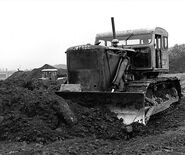 Byron's basis
Add a photo to this gallery

Byron is painted yellow with a black cab. The number "18" is painted on the sides of his cab in yellow.

Byron had a role in the cancelled episodes, Bossy Byron, The Importance of Being Patrick, Grass is Greener and No Dozer is an Island.