The Calliope is a steam-powered instrument that used to play music at fairs and somehow came into the possession of the Duke and Duchess of Boxford.

The calliope was neglected for many years and rusted. In Percy and the Calliope, Percy and Diesel were told to take it to the Smelter's Yard, but Percy wanted to make it work again. He tried filling it with water and coal and pushing it, but it did not work. The calliope was then taken to the Sodor Steamworks where it was restored. It was later a part of the presents train in Emily's Winter Party Special.

The calliope appears to be based on a National 53 whistle.

The calliope is painted red with yellow lining. It has brass pipes of various sizes and a green emblem with the letters "SR" painted on both sides.

Percy and the Calliope

The Calliope after being restored

The Calliope in the presents train

Basis
Add a photo to this gallery 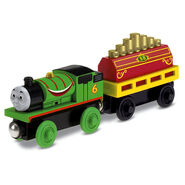 Add a photo to this gallery
North Western Railway
* RWS only | ** T&F only | --- Dropped
Retrieved from "https://ttte.fandom.com/wiki/Calliope?oldid=1682722"
Community content is available under CC-BY-SA unless otherwise noted.