Canada is a North American country consisting of ten provinces and three territories, bordering the United States to the north. In the continent of North America, this is the largest country of all and the second largest country in the world. Only one engine from there has come to the Island of Sodor temporarily so far. 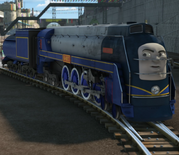 עברית Русский
*Disclosure: Some of the links above are affiliate links, meaning, at no additional cost to you, Fandom will earn a commission if you click through and make a purchase. Community content is available under CC-BY-SA unless otherwise noted.
Advertisement