There are many Canal Boats in Sodor's waterways. They are a popular tourist attraction, going up and down rivers and canals. The "Sodor Valley", "Heart of Sodor", "Lady Claire", and "Sodor Rose" canal boats were first seen in the third series, and "Sodor Maid" appeared in the fifth, tenth, and fifteenth series as well as in the magazine story, Holiday Train. Others have been seen in blue and green colours. One was also featured at the Wharf named "Reg of Sodor No.1". There are also some Canal Barges.

The black and red Canal Boat 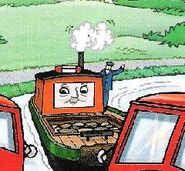 The orange, green and black Canal Barge
Add a photo to this gallery

Non-rail vehicles
* RWS only | ** T&F only | *** Other Media only
Retrieved from "https://ttte.fandom.com/wiki/Canal_Boats?oldid=1735439"
*Disclosure: Some of the links above are affiliate links, meaning, at no additional cost to you, Fandom will earn a commission if you click through and make a purchase. Community content is available under CC-BY-SA unless otherwise noted.