“What a wonderful surprise!”
―Caroline

Caroline's Cruise is a magazine story.

Henry is pulling a passenger train when he has to stop at a level crossing to let Caroline cross. Nearby, Bulstrode rests on the beach; they can all see the car ferry has docked. The Fat Controller then rolls off the ferry in his car and joins Caroline in crossing the railway. He has been to the Mainland to see the Railway Inspector. Sir Topham then goes on to boast about the splendid view of Sodor he had coming in by sea. Harold then hovers overhead boasting of the birds-eye view he has of the island. Caroline feels sad; she would like a tour of the island, but she fears her motor might break down. Henry wishes he could help her. Later, Henry has an idea which he tells the Fat Controller, who agrees. Next day, Caroline goes for a special trip around Sodor on the car ferry. 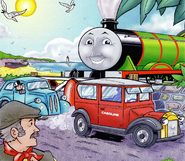 Add a photo to this gallery
Retrieved from "https://ttte.fandom.com/wiki/Caroline%27s_Cruise?oldid=1686148"
*Disclosure: Some of the links above are affiliate links, meaning, at no additional cost to you, Fandom will earn a commission if you click through and make a purchase. Community content is available under CC-BY-SA unless otherwise noted.