Carter is a green gantry crane who works at a dock in San Francisco, California.

Carter works at a dock in San Francisco, California, loading and unloading ships. He helped load Thomas onto a ship that was bound for China.

Carter appears to be generally disinterested in most of what goes on around him, as shown when he did not seem to care too much about what Thomas wanted. He also seems to have a somewhat dry sense of humour and makes sarcastic remarks about being told what he has to do and what the reasons are for doing so, such as when Thomas said he had to load him onto a ship to China so he could talk to a friend.

Carter is based on the Stothert & Pitt electric rolling gantry crane. Four examples of this type of crane are preserved at the M Shed museum at Prince's Wharf, Bristol. Beresford is also based on this design.

Carter's basis
Add a photo to this gallery 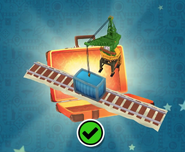 Carter's Thomas and Friends: Adventures! model
Add a photo to this gallery
United States
International Characters
* RWS only | ** T&F only | ✦ Changed location
Non-rail vehicles
* RWS only | ** T&F only | *** Other Media only
Retrieved from "https://ttte.fandom.com/wiki/Carter?oldid=1812297"
*Disclosure: Some of the links above are affiliate links, meaning, at no additional cost to you, Fandom will earn a commission if you click through and make a purchase. Community content is available under CC-BY-SA unless otherwise noted.